Traditional TV Companies Have A Leg Up In Big-Advertiser CTV Buys: Study 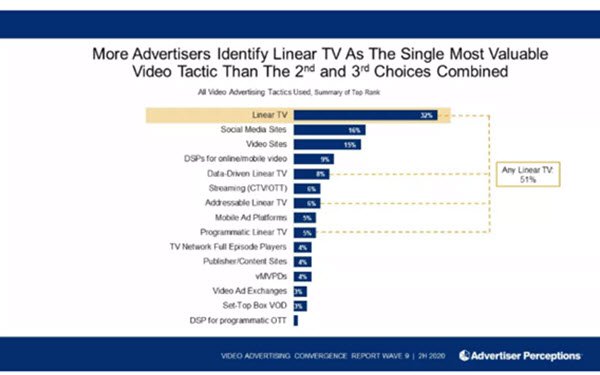 "Our primary impediment to [advertising] growth at this point is the behavior of TV buyers."

That was Roku founder/CEO Anthony Wood, speaking yesterday during the company’s Q4 earnings call. Despite Roku’s high double-digit ad-revenue gains, Wood was expressing frustration and/or puzzlement over advertisers spending $65 billion on linear TV in 2020 — even as linear audiences continue to decline and age, while streaming platforms grow and now command half of TV viewing time among 18- to 34-year-olds.

Given Roku's clout and the Roku Channel's exceptional growth, the comment seems particularly telling of advertisers' evolving relationship with OTT/CTV.

On one hand, there’s no question that investment is continuing to increase.

New advertiser research from Advertiser Perceptions finds that about a quarter of TV screen advertising budgets are earmarked for streaming this year.

More than half (51%) of video advertisers, including most of the largest ones, said they plan to increase their video spend over the next 12 months, with the rest keeping it at about the same levels. And among those planning increases, 77% said that their video ad spending is growing at a faster pace than other media. 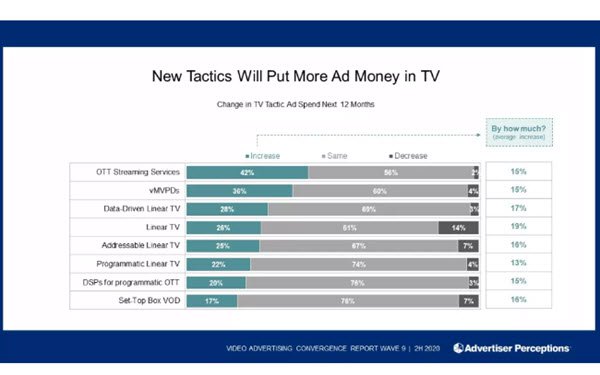 On the flip side, the surveys found 51% of advertisers saying they believe that linear TV is the most valuable video platform. (Chart at top of page.)

The next-closest were social media (16%) and video sites (15%), followed by DSPs for online/mobile video (9%) and data-driven linear TV (8%). CTV/OTT streaming — along with addressable linear TV — were designated most valuable by just 6%.

Bigger advertisers — those spending more than $25 million — were most likely to indicate a preference for linear TV over video sites or social media, although the reverse was true for those spending under $25 million.

Nearly half (45%) of advertisers said they could meet their reach goals without linear TV, but the overall trend points to increasing use of programmatic TV options and decreasing use of video sites and social media.

When they do buy digital video platforms, advertisers of all sizes say they require assurances, including that ads appear on reputable sites (87%), be paired with brand-safe content (80%), and run within professionally produced video content (79%).

It will come as no shock to hear that these reservations about streaming are driven primarily by two big concerns: ad fraud and inadequate measurement systems.

Nearly four in five advertisers identified OTT fraud (especially in programmatic auctions) as a concern, and 58% said that the more impressions they buy outside of linear TV, the harder it is for them to know the exact reach, frequency and effectiveness of their overall video ad campaigns.

The networks’ CTV platforms are “becoming safe harbors for the largest advertisers as fraud climbs in the medium,” Fromm summed up. “While the major internet platforms will lead in volume of streaming ads, TV network safety is keeping them the gold standard in video as the platforms evolve.”

While that’s good news for the networks’ upfronts (most advertisers said they plan to spend 40% of their budgets for upfront and 60% for scatter, as they did in 2020), three-quarters of advertisers said they’ll be scrutinizing how media companies plan to expand reach while also innovating in cross-screen measurement and personalization.

In other words, despite considerable progress on the measurement front, and various efforts to reduce fraud (including companies dedicated to fraud prevention and growing use of the IAB Tech Lab’s authorized digital sellers list specifications for apps), advertisers are still looking for more accountability from CTV/OTT. Which is only prudent in any new environment.

Advertiser Perceptions surveyed 284 advertisers and agencies in November and December for its Video Advertising Convergence Report, and last month also surveyed 300 advertisers about their upfront buying.