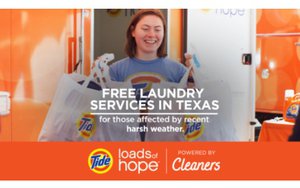 Tide’s Loads of Hope program, despite its title, sounds a little grim when described. It’s the detergent brand’s outreach to people in areas hit by wildfires, hurricanes -- or now, by floods, brutally cold temperatures and lack of electricity.

Usually, Loads of Hope arrives in brightly painted vans in areas of the country devastated by one thing or another.

But through Friday, instead of the vans, the Procter & Gamble product’s 20 franchised Tide Cleaners stores in Texas are providing free drop-off laundry services to residents impacted by the storm, on a first-come first-serve basis, until each laundry has reached capacity.

Extensive precautions against COVID-19 are practiced. Last March, the stores detailed all the health precautions it takes to protect consumers.

“When Tide saw what people across the state of Texas were experiencing, we knew we had to do something to help. Our hope is to make everyday chores like laundry as seamless as possible and lighten the load for those experiencing unprecedented challenges right now,” said Alex Perez, Tide’s brand director, announcing the program.

As Marketing Dailyreported on Monday, brands from Walmart to Ford, Tesla, Lowe’s and Smithfield Foods have all pledged aid to Texans following the devastating storms and freezing temperatures that knocked out power, wrecked homes damaged by frozen pipes and disrupted essential services including food delivery.

As of November 2018, when Tide’s vans were sent to locations near the California wildfires and other disasters, a Loads of Hope administrator estimated the program washed 4,000 loads and spent 48 days on the road. P&G says since the program began in 2005 after Hurricane Katrina, it’s washed more than 70,000 loads of laundry for more than 50,000 families impacted by disasters across the U.S. and Canada.

The winter storm and flooding throughout most of Texas is the second time recently the Loads of Hope program has come to Texas through the Tide stores. Last March, as the pandemic took hold, it provided free laundry and dry-cleaning services through its Tide Cleaners stores to a variety of first responders in Houston, Indianapolis and Phoenix, and then on to 22 other U.S. cities.