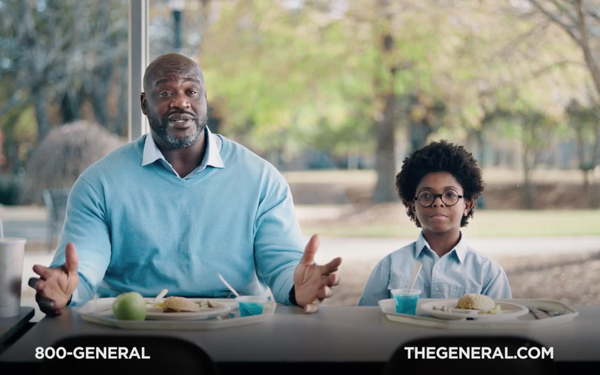 The General announced a brand refresh and campaign that marks a shift in the brand’s persona.

Creative aims to paint an honest picture of how consumers see the brand, acknowledging shortcomings and tackling misperceptions head-on to rebuild trust and credibility, per the company.

The NBA Hall-of-Fame center signed on as the insurance company’s brand ambassador in 2016. Creative also features actor/comedian Craig Robinson and Shaq’s co-hosts from "Inside the NBA," Kenny Smith and Ernie Johnson, Jr.

This is the first work from Chicago-based Highdive, which was appointed AOR in November. The General most recently worked with creative agency Art Machine.

“As our first assignment with The General, we felt a great sense of duty to get this right and bring new, quality creative that more accurately depicted the kind of quality company they are,” said Mark Gross, Highdive co-founder and co-chief creative officer, in a release.

The ad campaign is launching 10 spots that will roll out on TV, digital and social media platforms beginning in early February.

The General is a subsidiary of PGC Holdings Corp., which is wholly owned by American Family Mutual Insurance Company.