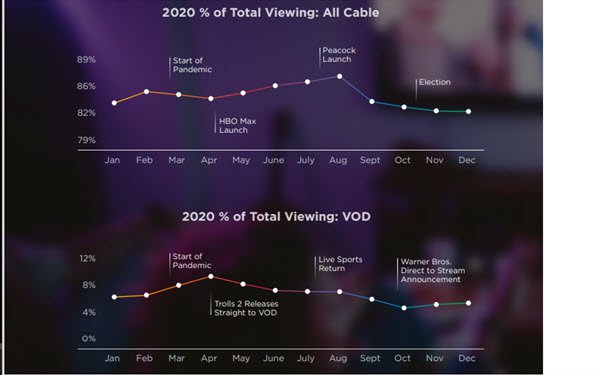 When it comes to campaigns promoting movies and TV shows, going beyond linear to add OTT and connected TV to the mix can produce significant performance lifts, according to research in a report from Effectv, Comcast’s ad sales division.

An analysis of 57 2020 Comcast client campaigns that included both addressable and non-addressable components found that those that reached 11% or more of their target audience on both linear and video-on-demand saw a four times higher lift in viewing than those that did not, according to the best practices guide, “Changing Tune for Tune-In Advertising.”

With the exception of sports programs, all advertisers with double-digit lifts in viewing ran on two platforms at the same time.

Movie/TV promotional campaigns airing on both linear and VOD also converted 20% more households, on average. Using data-driven linear in addition to addressable, instead of addressable alone, produced an average 193% lift in household tune-in.

In addition to reaching audiences who are less apt to watch linear in general, adding OTT/CTV appears to help balance differing viewing patterns in response to societal or entertainment events.

As part of its research, Effectv charted overall cable versus overall VOD viewing patterns over the course of 2020. The analysis confirmed that there is a slightly inverse relationship (charts above).

“When it comes to share of viewing for cable, the biggest increases were seen during major moments in linear viewing in 2020 — the return of sports in late Summer and the election,” sums up the report. “It stands to reason that share for VOD tends to decrease when there are more linear viewing options. Seasonality trends play a role here too, with audiences spending more time with cable TV in the summer months over VOD as well.”

The analyses also support the effectiveness of continuing advertising beyond the show or movie premiere in order to maintain interest in future episodes, spur watching in VOD and DVR time-shifted modes, and contribute to social media and other word-of-mouth that keeps a program/movie top-of-mind.

The 10 campaigns with the greatest lifts in viewing had average lengths of 45 days.

Non-sports, non-news campaigns with flights longer than 16 days had a 58% higher lift average than shorter campaigns, and those with flights under 16 days were the only ones that had potential negative lift.

The research also confirms the efficacy of multiple creative executions.

However, variety backfires over a certain threshold.

Effectv found that campaigns that had more than 10 creatives saw diminishing conversion rates compared to advertisers that maintained four to eight executions.

Are these findings beneficial to Comcast's sales effort? Absolutely. But they're also potentially useful.