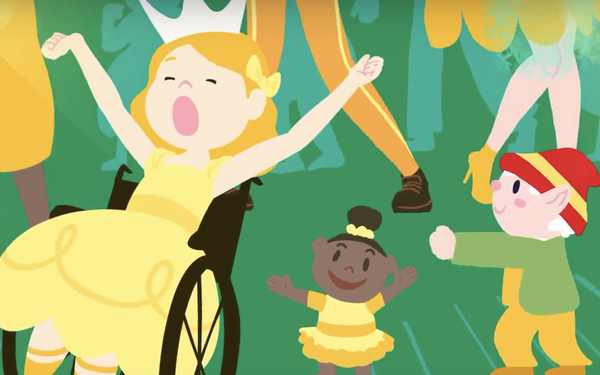 Ernie the Elf and his fellow denizens of Keebler’s iconic, 52-year-old Hollow Tree finally have an interactive experience to share with shoppers.

At the heart of the new campaign is an animated “Dunkumentary” in which a 7-year-old girl with a complex nervous system disorder recounts how Keebler and Make-A-Wish Foundation fulfilled her dream of becoming “queen” of Charlotte, North Carolina for a day.

Keebler is using QR code stickers on specially marked cookie packages and displays that, when activated with a mobile device, “transport” people inside the Hollow Tree.

Once there, they can learn more about Keebler cookies and Make-A-Wish and can donate to the charity while being guided by Ernie and his elfin friends.

In this video, an animated version of the child recounts her wish to become queen of Charlotte—whose nickname is the Queen City—and how it came true in 2018 when she was five.

Jessa and her family got to stay in a “fancy hotel” where she reveled in her new yellow dress while eating lots of French fries with “a big pail of ketchup.”

“Through this partnership and bringing it to life in-store, it’s really about engaging the consumer through their shopper journey as we modernize the brand and the act of giving with Make-A-Wish,” Keebler vice president Alicia Mosley tells Marketing Daily.

Since 2020, Keebler says it has donated nearly $750,000 to Make-A-Wish, which helps children who suffer from critical illnesses.

“It’s what our brand stands for—and that is creating moments of joy and magic,” says Mosley.

“When you think about what Make-A-Wish delivers for children, it’s really an experience for kids who want some type of renewed strength. So for us, it feels like a very natural connection to be able to bring the two brands together.”

Agencies involved in the campaign—which launched yesterday and runs through April—are VMLY&R, Day One Agency, Mindshare and Golin.

Ernie the Elf and Hollow Tree were first conjured up in 1969 by the Leo Burnett agency.