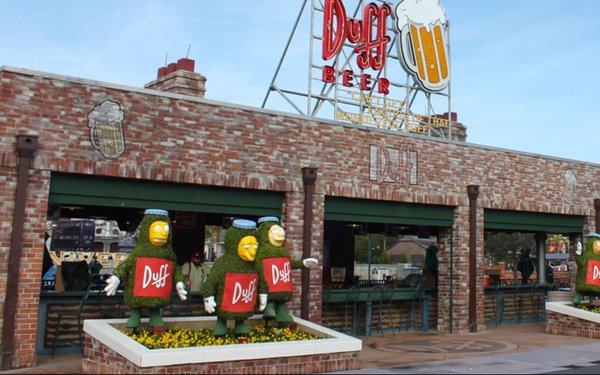 Universal Studios' homage to animated show “The Simpsons," named for the fictional beer its characters  quaff.

The most opposition to the idea seems to be coming from smaller beer distributors and craft brewers that think big beer companies would spend more to dominate these sites than less-wealthy companies can.

For years, drinking itself was not allowed inside Disney World’s Magic Kingdom, but that rule was loosened in 2016. The rule against advertising goes back to the post-Prohibition era bill called the Tied House Evil Law. The proposed new law is contained within Florida House Bill 73.

The parks are all for it, at least in part because the revenue would help them out of the financial crater caused by the pandemic.

According to Republican sponsor Rep. Josie Tomkow, California and Wisconsin have laws that are similar to the one Florida is trying to pass. Florida’s eight parks are the busiest, with around 90 million visitors in 2019.

Tomkow says the bill would give small brewers and distributors a chance to hawk their products and display their signage at the park during sponsored events. Universal, Disney, Anheuser-Busch InBev and Molson Coors Beverage Co. all contributed to Tomkow’s political committee, the Orlando Sentinel reported.

“My intent of the bill is for free-market approaches to allow these companies to enter into agreements with each other,” she told the Florida Politics website. “These agreements might not even be of cash value. For example, at a theme park, having a Guinness bar tap at a pub would fall under what we are trying to do. Right now that is against the law.”

Still, some fear that beer companies like Anheuser-Busch InBev, Molson Coors Beverage are not usually known for subtle advertising. They spend big. For example, large Budweiser signs dominate the skyline at most Major League Baseball stadiums, and some (Busch Stadium in St. Louis and Coors Field in Denver) own naming rights to the stadiums themselves.

Kelly Mallette, a lobbyist representing two beer distribution businesses, said the big brewing companies “don’t need this [theme park advertising] to further promote their brand, nationally or globally. They already can do that.  It’s the smaller guys that can’t do that... It is really about... allowing the biggest companies to enter into the biggest marketing agreements to help the biggest companies market together.”

Finding a drink isn’t hard at Orlando’s two main theme parks, advertising or not. Universal’s City Walk area, aimed more toward adults, has plenty of places that serve drinks. Otherwise in the park, the Springfield section, an homage to “The Simpsons” animated sitcom, features a Duff Brewery bar named for the fictional beer Homer and other soused Springfield residents quaff at Moe’s Bar.

Disney World’s Epcot Center is known for its Epcot Food and Wine Festival. The T Blog, which provides inside tips for Disney World visitors, says,  “You’ll see a fair number of guests wearing ‘Drink Around the World’-themed tees which promote the idea of having an adult beverage at every Epcot country or at every Food & Wine booth. There are 11 Epcot countries and dozens of Food & Wine booths, so even if guests are sharing drinks, the amount of alcohol some guests consume can indeed be problematic.”