Lest We Forget, TV Reminds Us Of World's Misery 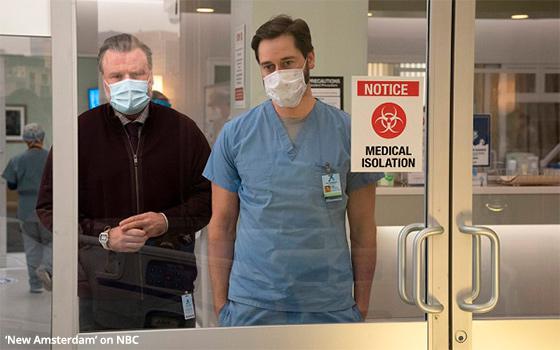 Those wishing to escape from the sadness that grips so many people these days are advised to steer clear of the season premiere of the NBC hospital show “New Amsterdam” on Tuesday night.

The episode, which the TV Blog previewed the other day, wears its heartbreak on its sleeve from the very first opening sequence.

This consists of a montage of clips that have been spliced together to tell the story of the heroism and exhaustion of the show’s healthcare workers -- doctors, nurses and other staffers at fictional New Amsterdam Hospital in New York City who have been working overtime to battle the COVID-19 pandemic.

A song is played over this montage that represents a gloomy trend in the recording industry that the TV Blog mentions from time to time.

It is the re-recording of an old song whose original version was happy and optimistic, but in the redoing, the same song is delivered in a dull monotone that makes it sad and dirge-like.

In this case, the song is a remake of “What a Wonderful World,” which was first sung by Louis Armstrong in a version that has attained worldwide fame ever since its release in 1967.

Armstrong sings the song in a voice filled with joy. The version heard at the beginning of “New Amsterdam” on Tuesday night is the complete opposite.

Speaking strictly for myself, I am still trying to hold on to a feeling of optimism about our world, despite what I see in our news and entertainment media.

And where the latter is concerned, pessimism, misery and tragedy are not entertaining for me. This week’s season premiere of “New Amsterdam” is a case in point.

Please let me emphasize, as I often do about many TV shows, that “New Amsterdam” is very technically proficient. It is very well-made. Its rendering of a big-city hospital and its workers and patients feels appropriately dramatic and TV-like.

Like other hospital dramas that have come in for commentary here in the TV Blog over the past year or so, “New Amsterdam” deals with the COVID pandemic in a way that attempts to move the show’s time frame to a post-pandemic future.

By the conclusion of the opening montage, hospital workers are seen getting vaccinated and the implication is that life in the hospital is on the verge of getting back to normal.

Among other things, hospital staff is not seen in most of the show wearing masks (the above photo from the season premiere notwithstanding).

But vestiges of the COVID pandemic are still in evidence. For one thing, one of the hospital’s own top doctors is still on a ventilator. And hospital administrators are still dealing with acute shortages of equipment and drugs that were all used up in their battle with the coronavirus.

However, with COVID no longer the top preoccupation for the staff of New Amsterdam Hospital, they are now in position to pay full attention when an entirely different tragedy occurs -- namely, the crash of a commercial airliner into the East River that occurs right behind the hospital.

Here again, the effort that was apparently made to make this airline water landing as realistic as possible is admirable because it really does look like the real thing.

However, the TV Blog feels obligated to question the entertainment value of such a thing. Perhaps such scenes play better out of town than they might play here in New York City.

For those of us who live near the city’s two rivers -- the East River and the Hudson -- aviation mishaps in the water are not unheard of. And some of us have even borne witness to the real thing and their immediate aftermath.

Thus, it is difficult to recommend a TV show that traffics in a dramatization of one.