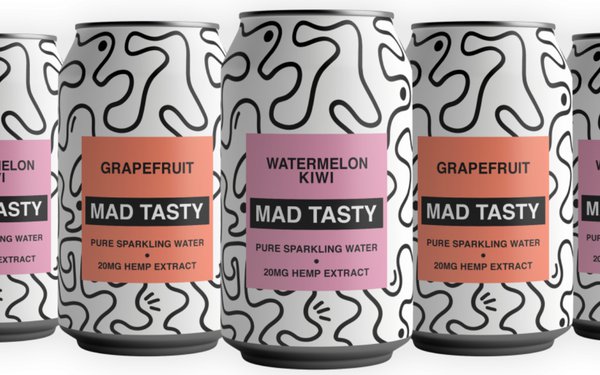 CPG brands that have found it difficult to generate awareness and trial users during the pandemic should be glad they haven’t been promoting products containing hemp.

Even if hemp products contain legal amounts of THC per federal law, the Food and Drug Administration is far from issuing guidelines for hemp-derived CBD in food and beverages.

This has kept most national retail chains out of the hemp space—even though many of them gladly sell oils/tinctures containing CBD.

After Tedder sought alternatives to prescription medications for various mental and physical conditions on his path to embracing hemp, Mad Tasty was founded in 2018. The following year, the company received an investment from private equity fund First Bev.

In this interview, which is edited for clarity and length, Mad Tasty director of marketing Leila Khoury talks about the complexities of promoting hemp products, the company’s first OOH campaign, and its debut on Amazon in a partnership with The Vitamin Shoppe.

We can be part of the Google shopping platform, but we can’t be part of Google search. There are restrictions on display ads. We keep running into—even on the same platform—issues with approval. And you can’t pinpoint why.

CPG FYI: Where do you see the regulatory environment heading?

CPG FYI: How has Mad Tasty generated awareness so far?

Khoury: We’re not having our traditional retail traffic—and retail is a great place to educate consumers, especially with a new product. As far as advertising, we’ve limited it just because of the restrictions. Video has been a really nice way to communicate with our consumers, and testimonials. Having that word from a consumer that uses hemp and is really passionate about it is the best way to promote our products, I think.

CPG FYI: What’s the strategy behind your OOH campaign via trucks in certain residential neighborhoods in California?

Khoury: A standing billboard would be very specific to, I think, a retail location that we’d be trying to promote. In this case, we’re just trying to get brand awareness. We’re getting a lot of eyeballs on the trucks, and it piques curiosity. Our website is there to educate [people] on our product, with some hemp education to drive trial.

So it’s a little bit of a reverse. I’d like to educate consumers at the point of consumption at a retail spot, or be able to advertise benefits—but I can’t. So we thought, let’s reverse it and try to touch people with our branding and then feed them into our website and social channels.

CPG FYI: What does your retail distribution look like so far?

Khoury: We can only be in convenience stores, small natural-foods stores, and cafes. We can’t be in national chains right now because they’re all kind of not touching hemp. So the Whole Foods and Krogers are not a space we can play in right now—which of course is upsetting as a startup.

We’re in southern California, Colorado, Austin and Dallas, Nashville, and we just opened Chicago. So although COVID has really changed the retail environment, we are slowly picking up cities that are hemp-friendly.

CPG FYI: Talk about the importance of being on Amazon.

Khoury: We’re very excited about Amazon and that we partnered with Vitamin Shoppe. The number of people looking for new products on Amazon is insane. You have to be on that platform if you’re a new product.