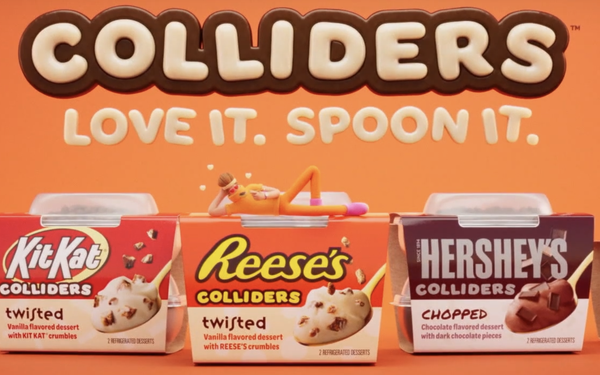 When it comes to cold and indulgent treats, strike while the pandemic-influenced trend is hot. That seems to be the mantra at Kraft Heinz, Hershey and Turkey Hill Dairy.

For Kraft Heinz—in partnership with Hershey—it’s a line of refrigerated desserts called Colliders. They’re derived from well-known candies and fronted by an animated character who represents “the candy lover in all of us.”

Meanwhile, Turkey Hill is rolling out three new product lines with a total of 16 flavors in the form of ice cream sandwich cookies, fruit and cream bars and layered sundae cups.

The launches come as consumers’ desire for all things sweet shows no signs of abating across a number of CPG categories.

Colliders are “spoonable” desserts based on the Reese’s, Mounds, York, Hershey’s, KitKat and Heath brands.

In this 30-second spot from Leo Burnett titled “Love It, Spoon It,” the animated front man for Colliders explains the origin of “your favorite candy flavors twisted, chopped or layered into cool, creamy desserts that are made to spoon.”

Text at the end of the spot informs viewers to find Colliders “near the refrigerated pudding.”

Asked whether Kraft Heinz would have developed Colliders in the absence of Covid-19, general manager for desserts Nicole Kulwicki tells Marketing Daily, “Yes, Colliders desserts were in development well before the pandemic. Given the scale of the launch, many conversations with retailers began as early as 2018.”

“Consumers are not only looking to indulge even more so now, but they’re looking for unique ways to do that within the frozen category,” Turkey Hill chief commercial officer Jim Sterbenz tells Marketing Daily.

Turkey Hill is the #1 ice cream brand in the Northeast and the fourth-largest premium ice cream brand, according to IRI sales data that show the novelty category up up 23% versus a year ago.

Turkey Hill will be running an advertising campaign for the new lines “over the upcoming summer months,” says Sterbenz.

According to Nielsen data, a year into the pandemic consumers haven't lost their taste for sweet indulgence foods.

For example, retail dollar sales of eggnog rose nearly 250% in the week ended Feb. 20 versus the previous year. Hot cocoa was up 92%, rolled fruit snacks 66% and dipped/covered fruits 65%.

The ice cream category was up 2.8% during the same time frame, with cones and cups ahead 9% and dessert bars rising 14%.