At Super Bowl, Verizon 5G Customers In The Stands Played Their Own Game 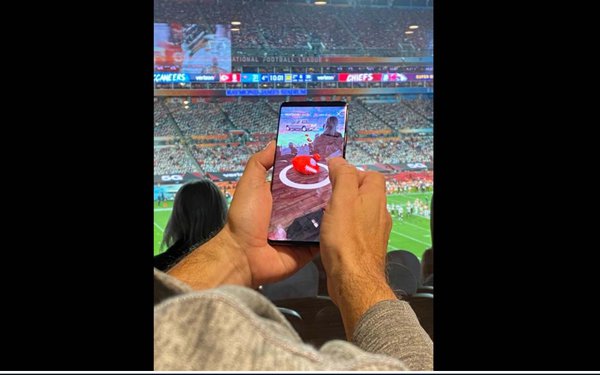 The object of the game was for players to virtually toss a football into the back of a virtual pickup truck positioned at midfield.

Fans in the stands with the NFL Ticketholder app received a push notification during the second quarter with an invitation to play.

The game players were instructed to point their phones, equipped  with Verizon’s 5G Ultra Wideband, to see that truck spring into being with the help of augmented reality technology, and then make the toss. As they did, they were able to see other fans making the same attempt, which Verizon touted as a great social accomplishment during the keep-your-distance pandemic.

By using Verizon 5G Edge and AWS Wavelength, the gameplay resulted in reducing latency (or lag) for the players. Verizon said the combination demonstrated how 5G can greatly shorten lag time, which, Verizon says, will allow innovators to develop applications with faster speed, ultra-low latency and massive bandwidth.

That translates to nearly instantly for large numbers of users. Presumably those next entrepreneurs will use it for much more meaningful endeavors -- or just more exciting games -- than tossing a virtual football into a virtual pickup truck.

Nicki Palmer, Verizon chief product officer, touted that community-building aspect in a prepared statement, and then got a little more technological in a hyphen-laden blast:  “The super-fast speeds, massive bandwidth and low latency provided by 5G and MEC lets players have a console-quality multi-player gaming experience on the go and allows developers to rewrite the rules for creating eye-popping, graphics-rich multiplayer action. The future of gaming is happening right now.”

Verizon has used the Super Bowl as a giant 5G experimental lab for the last few seasons, at least in part because Verizon’s Ultra Wideband millimeter wave-based 5G is super-fast, but doesn’t travel too far, like a few blocks, or the length of a stadium. It has or is the process of installing 5G in NFL stadiums throughout the league. The technology should be useful for other more practical uses at stadiums and in myriad other applications.

Though Verizon now offers 5G versions that are less fast with far more ability to travel, Ultra Wideband is what it’s used to attract consumers via ads, even if most of them can’t get Ultra Wideband now.

Separately, Verizon had an awkward Twitter moment last weekend.  VZW Support, the Twitter account for the company’s consumer support team suggested on Sunday that if users with Verizon 5G noticed their batteries were drawing down “faster than normal,” one of the options they should consider is turning on 4G LTE--which in other words, means shutting off 5G-- when they can. That tweet was quickly removed.