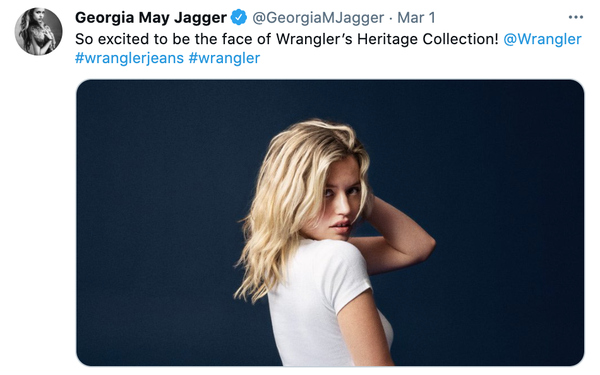 Global denim brand Wrangler has hired model Georgia May Jagger as the face of its Women’s Heritage Collection, which launched Fall/Winter 2020.

Jagger, 29, is the daughter of rock legend Mick Jagger and model Jerry Hall. Also a model, Georgia May Jagger has nearly 117,000 followers on Twitter, where she has tweeted about the deal several times this week. She also posted about the deal to her 959,000 Instagram followers.

Jagger was photographed by Cass Bird in New York for the “Turn Heads. Capture Hearts” campaign. The tagline nods to how the Wrangler woman confidently commands attention while living by her own rules, according to the company, which is owned by Kontoor Brands.

“For decades, Wrangler has inspired women to be confident, bold and express their personal style,” Rivetti says in a release.

The collection is available on Wrangler.com and in select retail locations across the globe.

Every jean in the Heritage Collection was designed with reference to the 0936 Wrangler Cowboy Cut slim fit men’s jean. The five styles are the global best-selling Wild West, a straight leg; the North American best-selling Wanderer, a flare; Westward, an exaggerated bootcut; Wriggler, a skinny; and Worldwide, an exaggerated wide leg.