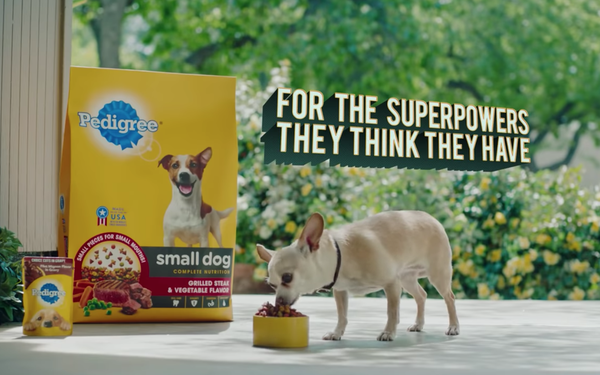 Pedigree is highlighting the big personalities of small dogs.

Anyone who has met a small dog knows that their personalities are not proportionate to their size, said Craig Neely, vice president of marketing at Mars Petcare.

"Whether they think they're rescuing their human from the 'evil' mailman or hypnotizing them with their puppy-dog eyes, all small dogs have this superhero complex,” Neely says in a release.

Creative agency BBDO NY developed a suite of new assets for the campaign, including a digital comic book, two 15-second online videos and a Snapchat lens and filter.

The comic book, called "The League of Hero-ish Small Dogs," stars small dog influencers Coco and Cici the Maltese, Bertie the Pomeranian, Maya the Mini Dachshund and Ducky the Yorkie. The story follows these dogs using the superpowers they think they have -- which the brand is calling their “hero-ish” qualities -- to save the day. It can be viewed on Pedigree’s social channels and website.

The online videos “Unintimidator” and “Underestimator” use both animation and live-action sequences to bring the “hero-ish” campaign idea to life.

The Snapchat lens allows pet owners to see what superpowers their small dogs think they possess and the Snapchat filter puts people and their pets right inside a comic.

The Mars Petcare brand is also kicking off the Hero-ish Small Dog Contest, where dog owners across the country can share the superpowers their small dogs think they have for a chance to have their pet featured in the next edition of “The League of Hero-ish Small Dogs” comic book. The contest is open for entries through March 26 at Pedigree.com.

The campaign is being supported through organic social content, a campaign landing page and influencer support from the dogs starring in the comic book. In addition, the brand is promoting the OLV spots with paid social.