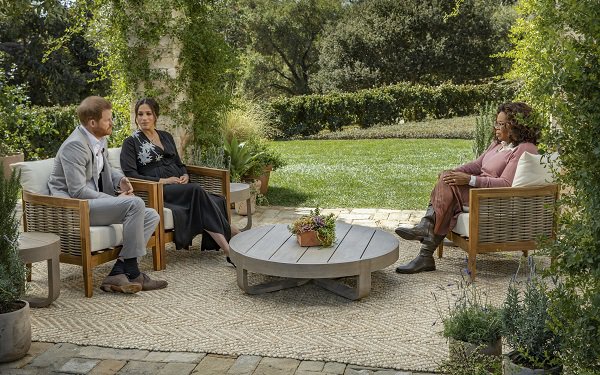 Sunday night’s Oprah Winfrey interview with Meghan and Harry was a triumph for Oprah, but not necessarily for her two subjects.

From a television standpoint, “Oprah With Meghan and Harry” (no last names necessary), this two-hour, prime-time interview special Sunday night on CBS was a complete success.

Where to begin? Well, maybe with the greatest of all outcomes -- which in this case was worldwide attention before, during and after the show. Running a close second: Total viewership amounting to 17.1 million viewers, according to numbers disseminated by CBS on Monday.

Both the global attention and the viewer count north of 17 million (for an original airing) is very rare for TV shows of any kind in our modern, fractionalized media world, and equally difficult to achieve. But Oprah and her team did just that.

While watching this show (from 8 p.m. to 10 p.m. Eastern), you could easily predict the headline-making stories and their probable headlines -- “Meghan: I Wanted to Kill Myself,” “Furor Over Son Archie’s Skin Color,” “Meghan: Kate Made Me Cry!”

Sure enough, those of us who went looking for media reaction to the interview shortly after it ended at 10 p.m. found all of those stories from America to Britain (and probably far beyond).

For news sites the world over, having this interview special come along on a slow-news Sunday evening was like having a pot of gold delivered to their doorsteps.

At least some of the credit for the massive coverage this interview received goes to whomever plotted its publicity strategy.

Press releases about the show received over the last two weeks listed the names of publicists at both CBS Entertainment and Harpo Productions. Hats off to them.

What made this interview and its headline-making revelations so newsworthy in the hours following its East Coast airing was that none of these tantalizing stories were revealed, or even barely hinted at, ahead of the show’s telecast.

Often, TV networks go overboard in revealing bits and pieces of these kinds of interviews in advance in order to drive viewership.

But with this one, the publicity team may have realized that it would require no such teasing because tune-in on a mass level was practically guaranteed.

As a result, we who were watching at home stayed tuned in and paid attention because news was being made often and with little or no warning throughout the show.

The two hours proceeded briskly for a show that was essentially two people -- first Oprah and Meghan -- and then three people (after Harry joined the two for the second hour) sitting in chairs talking.

This scene was broken up only occasionally by other footage shot in and around a chicken coop that Meghan and Harry maintain on their property, plus some archival B-roll and still photos used to illustrate aspects of their lives (such as Harry as a boy with his mother, the late Princess Diana).

But for the most part, it was talk -- albeit in an outdoor setting that could not have been more beautiful. At the outset of the show, Oprah said it was the backyard of a neighbor’s house located somewhere between her own and the home of Harry and Meghan, reportedly in Montecito, California.

With this in mind, it was no doubt difficult for some people watching the show to feel sympathy for this quasi-royal couple when seeing them in this environment in which they evidently live a life of ease and extreme wealth.

Still, both Meghan and Harry were well-spoken and in the process, gave an impression of likability -- possibly even for some of those watching who may have been predisposed to disliking them no matter what they said or how they came across.

Upon reflection afterwards, though, it was easy to react cynically to the blithe accusations of racism that they leveled at a member or members of the royal family who they then would not name.

Nor did they provide details other than the sketchy claim that someone in the royal orbit expressed curiosity about the complexion of their firstborn, Archie, because Meghan is a biracial woman.

It is also reasonable to wonder, when seeing these kinds of prime-time interview spectacles, why these people agreed to go on prime-time TV and air their issues and problems in the first place, while at the same time decrying all of the attention the media pays to them.

If Oprah asked them about this subject, then it was not included in the final version of the show that made it to air.

celebrity, television, uk
1 comment about "Oprah Triumphs With Meghan And Harry Interview".
Check to receive email when comments are posted.
Next story loading