Harry And Meghan In The Dock Of Public Opinion 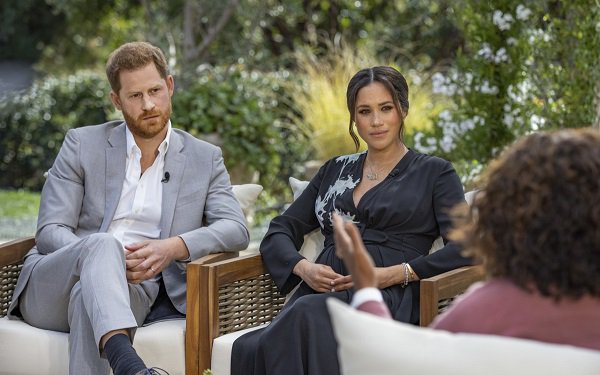 Perhaps the cleverest headline seen in a random search of the worldwide coverage of Prince Harry and Meghan Markle in the aftermath of their prime-time interview with Oprah Winfrey was the one that read, “Throne Under the Bus.”

It was on the New York Post web site, but it is likely it appeared elsewhere, since great tabloid minds think alike.

The headline referred to the verbal thrashing the now unroyal couple delivered to the British royal family in the two-hour, prime-time interview with Oprah that aired on CBS on Sunday and then aired in the U.K. the next day.

Titled “Oprah With Meghan and Harry,” the show has emerged as the most talked-about show of the year. It is a title it will likely retain for the remainder of 2021.

This prime-time spectacle raised so many issues that it rates two-day coverage here in the TV Blog. In the parlance of the news business, this story has legs.

One of the questions that still lingers in the air some two days after the big show (as of this writing on Tuesday) is: What were Prince Harry and Meghan trying to achieve with this interview?

If they were trying to make their case for being left alone by the world's news media, then mission NOT accomplished.

As anyone with half a brain could have predicted, this interview by its nature would have attracted worldwide attention, coverage and commentary even without the incendiary bombs the couple threw at the royal family. “Throne Under the Bus” indeed.

In case anybody needs to be reminded, these “bombs” were the accusations that: (a) Someone in the royal family wondered in a conversation with Harry about the tone of baby Archie's mixed-race skin color; (b) Meghan received no help from the royal family's management apparatus when she informed them she was depressed and suicidal; (c) management (also called “the firm” and “the institution” in the Oprah interview) would not agree to give Archie a royal title; and on and on.

Among other things, these unsubstantiated anecdotes have ignited an international conversation and outcry because in their veiled way, they accuse, by inference, the royal family and the “institution” that manages them of systemic racism plus indifference when it comes to the subject of mental health.

As the worldwide reaction has demonstrated, these accusations are debatable. On one side, an anti-royal backlash has arisen (and not for the first time) that seeks to “cancel” the monarchy.

And on the other side are factions defending Harry and Meghan's royal relatives such as his grandmother, Queen Elizabeth, and his father, Prince Charles.

The movement to cancel the monarchy notwithstanding, many Brits apparently still like and appreciate the royal family as a symbol of their country.

Moreover, some pro-royal commentators such as Piers Morgan have spent the last two days trashing Harry (and to a lesser extent, Meghan) for treating his grandmother disrespectfully by airing all of this dirty laundry in public, particularly at a time when Harry's grandfather and the Queen's long-time husband, Prince Philip, is ill and in the hospital at age 99.

If Prince Philip passes away, then Harry and Meghan have set the stage for a public funeral like no other, especially if they are thinking about attending it.