Technology Is The Star Of Chevy Bolt EUV, Infiniti QX55

The Chevrolet Bolt EUV and Infiniti QX55 are radically different vehicles with one thing in common: technology takes center stage.

I recently had the opportunity to test drive both models. The Bolt EUV, which is six inches longer than the original Bolt, has a definite SUV feel, while the QX55 feels more like a sedan, but with a surprising amount of cargo room, besting even another even bigger-than-the-Bolt Chevrolet SUV model.

The 2022 Chevrolet Bolt EUV is one of the first non-Cadillac vehicles on which General Motors is offering Super Cruise as a $2,200 option. Super Cruise is a hands-free driver assistance system that works on 200,000 compatible roads. The option is only available to add on to the Premier trim level of the Bolt EUV, which starts at $38,495.

The brand recently teamed up with Disney to reveal the all-electric vehicle, which goes on sale this summer along with a redesigned Chevrolet Bolt (which is six inches smaller than the EUV). Both are part of General Motors’ plan to launch 30 new electric vehicles globally by 2025.

If the system detects the driver’s gaze has turned away from the road ahead for too long, the steering wheel light bar will prompt the driver to return their attention to the road. If the system determines continued inattentiveness, it will use visible and audible alerts to notify the driver to take back control of the wheel. Super Cruise is available on Bolt EUV Premier.

So there won’t be any nap-taking in Super Cruise-enabled vehicles. While hands don’t need to be on the wheel, drivers still need to be paying attention to the road and be ready to take the wheel back if Super Cruise disengages, which happens on some portions of freeway. I noticed during the test drive where there were two freeways merging together, the system momentarily disengages.

I would love to see all of those features standard on ALL vehicles eventually. It would prevent a huge number of accidents and reduce driver stress and fatigue, which is also the number one reason to invest in Super Cruise. 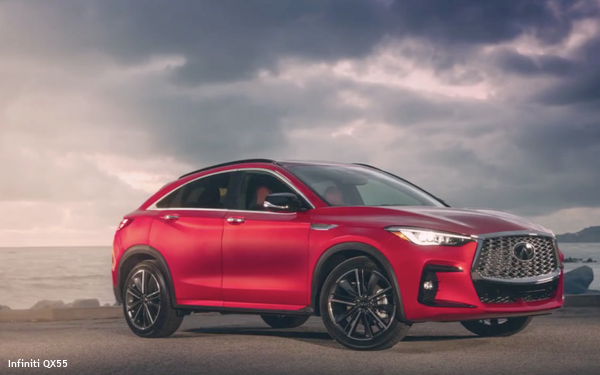 I drove the QX55 in the top-of-the line Sensory trim level, which runs $58,770. The vehicle has a luxurious two-tone leather interior and fantastic power. It’s a blast to drive. But if you fold down the rear passenger seats, there is a surprising amount of cargo room. In fact, more than in a mid-size Chevrolet SUV.

I didn’t have the opportunity to measure the exact cargo room in the Bolt EUV, but I eyeballed it and it’s definitely less than my daily driver, a 2015 Chevrolet Equinox. I was able to take a tape measure to the QX55 and the Equinox and the QX55 wins by a considerable amount — 40 inches wide by 64 inches long compared to 39 inches wide and a mere 54 inches long in the Equinox. In both cases I measured from the back of the cargo area to the top of the folded down seats.

One criticism of both the Bolt EUV and the QX55: the back seats do not fold completely flat. There is a slight incline. It’s probably not a big deal if you are moving furniture or bags of mulch, but if you are like me and haul around rescue dogs in crates, it is problematic. My Equinox has the same slant and the dogs in the crates on the ridge don’t seem to like it much.

I’m looking forward to seeing General Motors roll out the Super Cruise option to more of its vehicles across divisions. I hope even technophobic drivers will give it a chance. You don’t have to use it all the time, but the more you use it and learn to trust it, the more you will want to use it, I predict.