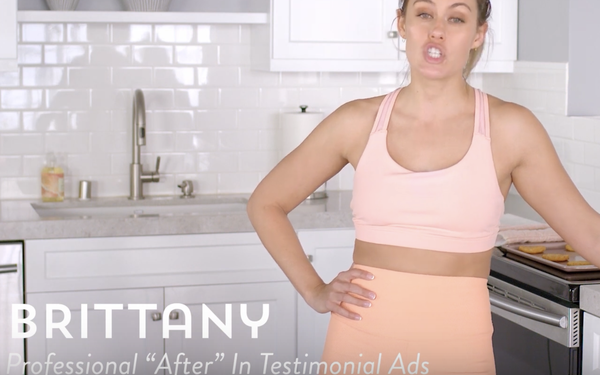 To promote its Cauliflower Hash Browns, plant-based, frozen-food brand Strong Roots is trolling what it calls “fad diets” and how they’re marketed.

The campaign creative for Cauliflower Hash Browns includes a two-minute teaser video, which is labeled at the opening as “paid actor testimonials.”

In this spot from DCX Growth Accelerator, a woman named Arye describes herself as “a professional actress for diet programs where I pretend to be a regular person who has lost some weight.”

Arye is followed by workout-clothed Brittany, who is used to being the “after” in before-and-after testimonial ads.

“I wasn’t a real user of the diets,” Brittany says. “I mean, I didn’t have 100 pounds to lose. I did do the tapeworm diet once and I would not recommend that again.”

The tagline: “No weirder than other fad diets. But you get to eat Cauliflower Hash Browns.”

The commercials get weirder.

In this two-minute spot, a woman says she was told “I should only eat in the shower, while crying” and a man laments about being told to “only eat yak butter, but I don’t have a yak.”

The commercials direct viewers to a special website where they can access a 60-page book containing a 21-day “meal plan,” 30 pages of recipes and coupons.

The book is filled with tongue-in-cheek tips for the so-called Cauliflower Hash Browns diet. For example, it helps to identify such bad eating habits as “using potato chips to get through a rough romantic break-up, watching shows about sloths for 8 hours at a time, or binge-eating chocolate powder right out of the container.”

Running on Facebook and Instagram, the campaign is aimed at millennials and Gen Z consumers, according to DCX Growth Accelerator chief strategy and creative officer Doug Cameron.

“That group tends to be targeted by a lot of diet marketers around this time of year, and we thought this would sync up very well,” Cameron tells Marketing Daily.

The humorous nature of the campaign is based in part on the fact that Cauliflower Hash Browns are stocked in the frozen food aisle.

“There are a million products in there and it’s kind of hard to stand out. That’s why we kind of wanted to push it. It’s a tough part of the store,” says Cameron.