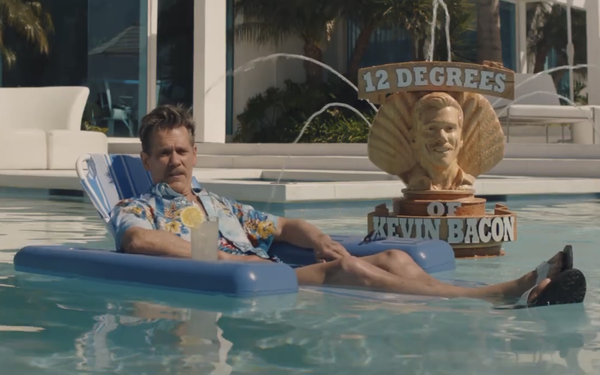 It’s easy to understand how the wireless provider Visible would be interested in getting Kevin Bacon to front for its new commercial.

The Visible Party Play plan can lower a monthly smartphone bill to $5 -- if you’re the kind of person who knows a lot of people who know a lot of people.

Hence, the connection with Kevin Bacon, the actor who is also widely known for the Six Degrees of Kevin Bacon trope, which posits that every Hollywood movie star is just six steps away being connected to him. The idea evolved into a parlor game in the Internet’s earlier days.

In the ad, from the agency Madwell, Bacon says he’s upped that to the 12 Degrees of Bacon, explaining how he’s going to use it by getting all his friends to sign up. Each person who signs up on a user’s suggestion lowers the subscriber’s cost from $25 to $5 for the month. In theory, 12 good friends -- or just people you know -- could make your bill $60 for the year.

“I’m bringing everyone within 12 degrees of me, starting with my dentist, Sarah and her assistant Mark,” Bacon says, lounging in her dental chair. Next, we see him at his barbershop and then with a “really hip acupuncture group.” He ends up lounging again with his two stunt doubles he’s going to convert, and actor Michael Gross. Bacon and Gross starred together in the 1990 comedy-horror film, “Tremors.”

The Bacon spot debuts on the Grammy telecast this Sunday. (As far as degrees of separation go, Bacon has never won or been nominated for a Grammy -- but, along with his brother Michael, has recorded eight well-regarded albums since 1995.)

Visible, until recently, hasn’t been very visible as an advertiser. This is just its third commercial, showing some new push for Visible in the prepaid field where its Verizon parent made news last year for its $6.25 billion purchase of TracFone, another bigger provider.  T-Mobile owns Mint and Metro, while AT&T owns Cricket.

There’s speculation by analysts that Verizon may be pulling away from postpaid subscribers -- the typical Verizon subscriber -- where it leads the pack ahead of T-Mobile and AT&T. That would possibly explain the extra ad push for Visible.

And the whole prepaid category may end up invigorated. The research company IDC wrote late last year that its survey of the business suggests “there may be more value and appeal to the customer segment than previously thought.”