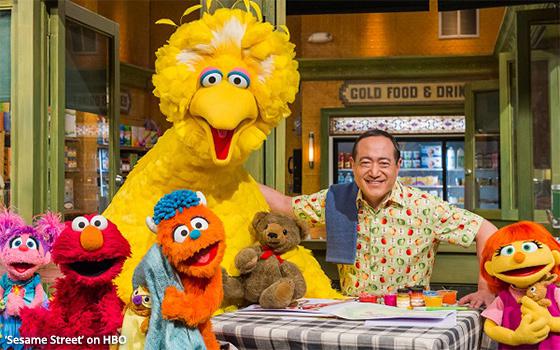 “Sesame Street” is making every effort to ensure that the Muppets don’t offend anyone.

It's all about diversity, inclusion and equity these days, isn't it? They are the new buzzwords of corporate America, and no less so in our sprawling entertainment industries. “DEI” is the shorthand for these new concerns.

Among the many companies and institutions that have created new executive roles to oversee and manage their DEI is Sesame Workshop, producer of “Sesame Street,” which is now seen on HBO.

Earlier this week, Sesame Workshop announced that Wanda Witherspoon, long-time exec who most recently has been vice president of public affairs and special events for the company, will take on the new title of chief diversity, equity and inclusion officer.

These kinds of titles are being created all over the place, and sometimes they appear as acronyms, such as this one -- CDEIO.

In a charming coincidence, if you repeat the last three letters of that acronym in a certain way, it suggests another children's favorite, “Old MacDonald Had a Farm.” E-I, E-I-O. Fun, right?

“As Chief Diversity, Equity, and Inclusion Officer [caps theirs], Witherspoon … will lead a review of the organization's global business practices at every level, ensuring that all processes -- vendor selection, employee recruitment, staff development, and more -- reflect the Workshop's foundational values,” said a press release from Sesame Workshop.

“Witherspoon will continue leading multi-level employee discussion groups, enabling her to represent many viewpoints. She will also help teams throughout the organization assess their work through a DEI lens,” it said.

The TV Blog wishes Ms. Witherspoon well in her new role, although it does sound like a lot of work -- something the TV Blog tries every day to avoid -- especially since she is not shedding any of the responsibilities she already has.

While we are on the subject of seeing things through lenses, that is the medium through which “Sesame Street” and its famed Muppet characters are filmed and then provided to children and their parents the world over.

This superlative, long-running, children's educational brand is so well-known that if a hundred people were surveyed today to articulate the show's values, most of them would probably hail its long-time devotion to the showcasing of diverse peoples and characters.

This mindset has been there from the beginning, as it reflects the fictional urban-neighborhood setting in which the show is set.

As a visual example, behold the photo above. It shows at least five Muppets (I'm not sure about that Teddy Bear) and one human who would appear to be Asian.

The Muppets themselves -- being Muppets -- come in diverse colors as well. I have no idea if this was the intention of the show's original creators, but the rainbow of colors that the Muppets represent can also be seen as a symbol of the show's commitment to diversity and its implied message to children that people, like Muppets and cartoon characters, come in all varieties.

Thus, “Sesame Street” seems to have the diversity and inclusion categories covered. It might also tick the equity box as well, but I am less clear on the new, burgeoning usage of this word and its definition in discussions about social justice.

I am aware that it seems to have replaced the word “equality” in these discussions, but I remain uncertain of the difference. Please rest assured that I am committed to continually reeducating myself about this crucial issue.

As for the Muppets, I have heard no reports that “Sesame Street” is carrying any content warnings these days alerting its kiddie audience about any upcoming offenses where the subjects of diversity, equity and inclusion are concerned.

However, warnings have turned up on various episodes of “The Muppet Show” on Disney+.

Here is what these warnings say, according to Variety: “This program includes negative depictions and/or mistreatment of people or cultures. These stereotypes were wrong then and are wrong now. Rather than remove this content, we want to acknowledge its harmful impact, learn from it and spark conversation to create a more inclusive future together.”

Well, I say this is not enough. I think the Muppets should be canceled, along with Bugs Bunny (for his relentless sarcasm), Elmer Fudd (for his devotion to guns and hunting), Daffy Duck (for making a mockery of people with speech impediments) and Mr. Magoo (because there is nothing funny about nearsightedness or other vision impairments). In fact, while we're at it, just cancel my entire childhood.