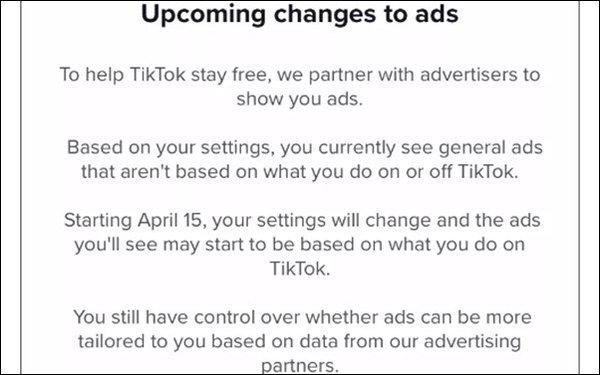 TikTok — which has seen its advertising boom since Donald Trump was voted out of office and it’s no longer threatened with a U.S. ban — now appears confident enough to flex its muscles a bit on the privacy front.

TikTok account holders who have opted out of receiving personalized ads on the app have begun to receive notices that they will no longer have that option, at least as it pertains to ads that are targeted based on their actions within the TikTok app.

Users will still be able to opt out of ad targeting based on data supplied by TikTok’s “advertising partners,” says the notice (above).

While new for Twitter, the policy — which applies to all users except those in the European Union, where the General Data Protection Regulation (GDPR) requires businesses to get users’ consent — is actually in sync with the existing policies of Facebook, Twitter and Snapchat, notes Recode, which first reported the development.

The other apps do allow users to try to reduce tracking by manually deleting whatever “interests” have been assigned to them based on their in-app activities, but it’s not yet clear if TikTok will follow suit on that front.

“Our goal is to help businesses reach the people they care about in a creative and meaningful way, while also respecting the privacy of our users,” TikTok told Recode, without offering a rationale for the change. “As our advertising platform matures, we continue to be transparent with our users about their choices with respect to personalized advertising on our platform.”

As the report points out, it’s likely no coincidence that the new policy comes as Apple is preparing to launch its iOS 14 update requiring that apps obtain an opt-in from users to track them across apps and websites.

The massive user data and the ad targeting capabilities enabled by cross-app tracking is major source of revenue for mobile apps like TikTok, which may be rushing to capture as much data for user profiles as possible before Apple empowers iPhone users to deny access.