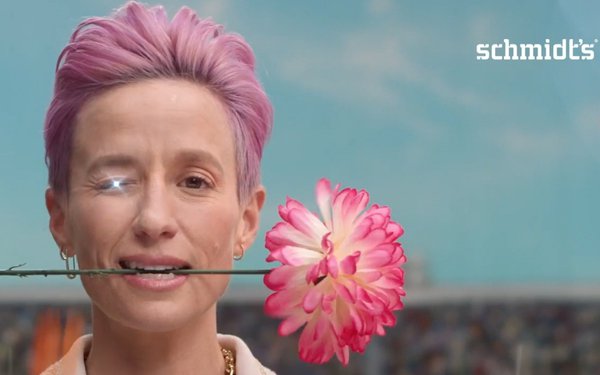 As if FOMO wasn’t enough, now we have… hold your nose and wait for it… FOBO.

There’s another fear factor in play in the campaign from Edelman—which fielded a survey of 1,000 U.S. adults in January—that poses a roadblock for brands that want people to try natural products.

“We know the number one barrier to trying natural deodorants is fear that it won’t work,” head of Schmidt’s Naturals Mollie Crudden tells Marketing Daily. “It’s a barrier to trial.”

Green is a dominant color in this 30-second video, as Rapinoe declares, “You’re a natural. Don’t you deserve a certified natural deodorant?”

The word “certified” comes into view as she holds a green soccer ball—around which appear the words “certified natural by Ecocert COSMOS Natural.”

“One or two swipes keeps FOBO away. It’s strong enough for me, but made for everyone,” says Rapinoe.

Ecocert was established in France in 1991 to certify eco-friendly products. COSMOS stands for COSMetic Organic and natural Standard.

“It is a really big deal, both for Schmidt’s and for the industry,” says Crudden. “What we recognize is that natural is a confusing space in a lot of different categories, but certainly in deodorant. There can be a lot of confusion.”

As for the target audience for the campaign—running on digital platforms and streaming television on Amazon and Hulu—Crudden says it’s less about traditional demographics than mindsets.

“For Schmidt’s it’s different because it’s not a specific demographic, it’s really a psychographic. It’s someone who’s interested in naturals but hasn’t made the switch to a natural deodorant for fear that it won’t work.”

That distinction crosses gender lines. “This is a product [where] we see both really strong usage for men and for women,” Crudden says.

Founded in 2010, Schmidt’s is a Unilever brand that the CPG conglomerate acquired in 2017.