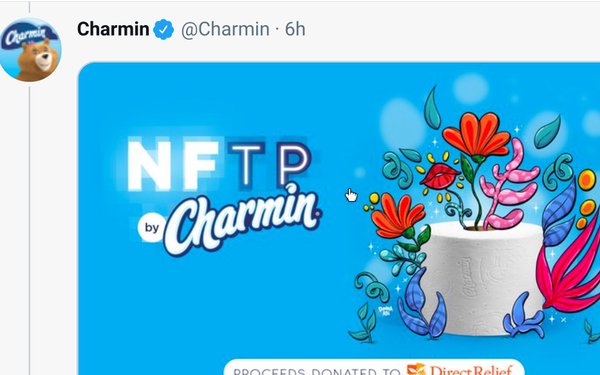 How’s that again? Fungus what?

No, non-fungible token. The toilet tissue brand on Wednesday presented what it is calling its “crypto collection,” which consists of three original pieces of digital TP art -- art available only in a digital file. They’ll be offering each of them in an NFT crypto currency auction, with the proceeds going to the humanitarian aid group Direct Relief.

NFTs are the latest marketing trend to make you feel your FOMO was well-founded.

But for starters, non-fungible means what you’re buying is something that can’t be replaced. As Investopedia says as an example, a dollar bill is fungible because it can be exchanged for four quarters.

(Charmin calls it NFT(P) art, just to play with the shorthand for toilet paper.)

“Similar to a certificate of authenticity for a painting, in this case, the [Charmin] file would be the "painting" and the NFT would be the ‘certificate of authenticity,’ ”a spokesman said.  For the Charmin art, each winner also will get a physical digital frame to hang their art in the real world. Oddly enough, the real physical thing probably won’t be worth anything. Charmin could make a million of ‘em.

Because the authentic NFT digital art is one of a kind, it could grow to be worth thousands of dollars, or possibly even more, as recent transactions prove. Or, possibly less.

The oddness of the promotion is intentional. Rob Reinerman, Charmin’s vice president, said in a statement that “a better bathroom experience can expand well beyond the seat. NFT(P) is a fun and playful way to give the biggest Charmin fans a one-of-a-kind virtual version of their favorite roll.”

The Procter & Gamble brand has in the past dealt with simpler advertising  concepts like cuddly bears with soft tushes or an extremely mindful grocer who kept an eye out for customers squeezing the goods.

This is quite different. For the auction, Charmin directs users to Rarible, a website that helps facilitate the creation and sale of digital collectibles by blockchain and cryptocurrency.

Charmin says the artwork by Donna Adi, Shanee Benjamin and an artist called Made by Radio has an  “unexpected style and a playful, unique perspective that brings the splendor of toilet paper to life.”

So what is the lure of NFT? An explanatory Reuters video tries to explain why a fan recently paid $208,000 for a video clip of  a slam dunk by NBA superstar LeBron James and why popular NFL receiver Ron Gronkowski is launching a series of NFT trading cards from which he says he expects to make millions.

To add to the mania, on Wednesday, Sports Business Journal reported the NFL is in “active discussions” to develop a digital collectibles and NFT strategy.

More stupendously, “Everydays: The First 5000 Days,” a digital piece by a designer called Beeple, sold at a Christie’s auction for $69.3 million earlier this month.

Only two pieces of physical art by living artists -- Jeff Koons and David Hockney -- have ever attracted higher prices than that, according to a Christie’s spokeswoman quoted in The New York Times.