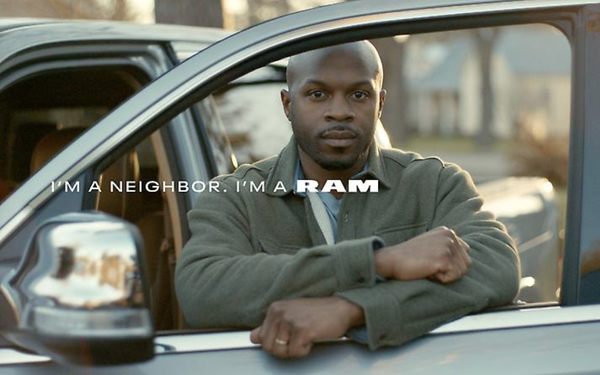 Stellantis is breaking creative that showcases stories of Ram owners who set out to make a difference in their communities with the help of their Ram trucks.

Themed “I’m A Ram,” the spots include music from five-time Grammy winner Chris Stapleton, who has a relationship with the brand dating back to early 2015. The musician does a rendition of the classic song by the same title that was originally released in 1971 by Al Green.

Two of five new campaign spots, “Neighbor” and “Provider,” are debuting during NCAA March Madness telecast. An extended 60-second version of “Anthem" is available on YouTube. Additional spot will debut throughout the year.

The creative platform “celebrates the spirit and determination of our owners, and further reinforces our 'Built to Serve' commitment,” say Marissa Hunter, head of marketing, Stellantis - North America, in a release.

In addition to the new broadcast placements, the campaign launch includes a behind-the-scenes conversation with Chris Stapleton as he drives around in a Ram 2500.

In 2009, the Ram Truck brand launched as a stand-alone division instead of as a model under the Dodge brand.