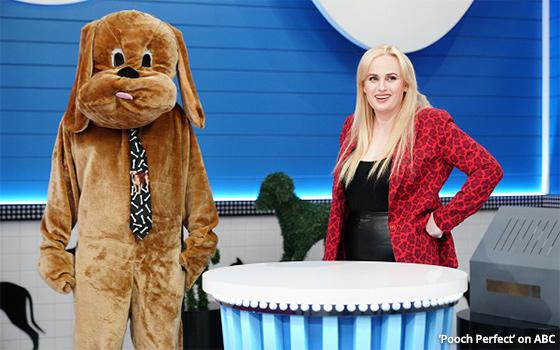 If dogs are emotionally capable of feeling misery, then the pooches on parade in a new dog-grooming competition show on ABC must be among the most miserable canines on Earth.

In the show, titled “Pooch Perfect,” dogs are abused -- er, I mean, “groomed” -- by pairs of professional dog groomers who have been selected for this competition based on their reputations and also, presumably, their diversity.

But there is one thing they evidently have in common: All are willing to wreak grotesque transformations on innocent creatures that are incapable of saying no.

The practice on display in this “Project Runway” for pooches is not dog-grooming in the classic sense that it is understood and guided by standards set down by respected kennel clubs.

In this show, these groomers paint their canine clients in Day-Glo colors, carve shapes into their fur and festoon them with hats, articles of clothing, hair extensions, ribbons and rhinestones.

The whole thing is so tasteless and stupefying that this show emerges as the worst show of 2021, at least so far. It is so off the mark that it is hard to imagine a worse show of any kind coming along this year.

The show’s title, “Pooch Perfect,” is a pun on the title of the three “Pitch Perfect” movies. And the host of this “Pooch” pageant just happens to be one of the stars of those movies, Rebel Wilson (photo, above right).

The movies are not mentioned in this show, however -- likely because they weren’t Disney movies. They came from Universal.

In her introductory remarks in the series premiere airing this week, Wilson reveals that when she was a child in Australia, she grew up in the dog-show world, and even won awards in her age group for her dog-handling skills.

If that is the case, then she should be ashamed of herself for participating in this piece of dreck. In the series premiere, the show’s grooming pairs are challenged to transform a group of unlucky dogs into other animals.

This ushers in a series of scenes in which these hyperactive, flamboyant dog groomers assault these poor dogs with paintbrushes, scissors, clippers and hairclips until they are made to resemble other animals.

Yes, I realize the “paint” being used here is a substance that is likely not physically harmful to the dogs, but the harm to their dignity is incalculable.

How does a dog say, “Just kill me!”? Answer: It can’t. And so, the dogs just have to stand there and take it as they are made up to look like a wide-ranging array of other animals -- including, in this episode, a goldfish, lynx (yes, a cat), pink flamingo, leopard (another cat), tiger (cat), fire ant, peacock, elephant, skunk and badger.

I would not be at all be surprised to hear that one or more of these dogs literally died of embarrassment after this show was over. Can dogs commit suicide?

Like other reality-competition shows, “Pooch Perfect” has its own three-member panel of judges. This one has a veterinarian, a professional groomer from New York City and reality-TV star Lisa Vanderpump, who seems to go out of her way to make a bad show even worse.

She sets the tone near the beginning of the premiere episode of this seemingly family-friendly show airing at 8 p.m. when she declares, “As you know, doggy-style’s my favorite!” And it is all downhill from there.

pets, television
1 comment about "ABC Dog-Grooming 'Pooch' Pageant Should Be Curbed".
Check to receive email when comments are posted.
Next story loading