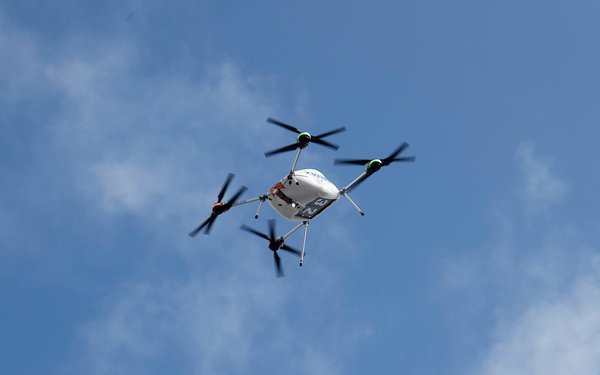 The delivery is not available everywhere. In fact, it’s barely available anywhere -- just in the small Irish town of Oranmore, County Galway, population, 4,900.

But that’s not the grand plan. Samsung and its drone partner, Manna Drone Delivery, say they are “keen to expand this service nationwide in the future.”  It is only offered for orders made online.

Samsung’s announcement envisions “end-to-end contactless experience for Samsung customers from their initial online order through the company’s Irish eStore, right through to fulfillment.”

The Manna drone (shown above) can fly from 164 feet to 262 feet up in the sky, and at speeds that can get to just over 37 miles per hour. Manna and Samsung say that’s fast enough to get one of the Galaxy devices directly to a home anywhere in Oranmore -- or about 1.25 miles -- within three minutes.

In a statement announcing the new service, Eammon Grant, head of online for Samsung Ireland, made indirect reference to the pandemic as a reason the drones are an idea whose time has come.

“Superior customer experience is at the heart of what we do and with this new service we are embracing what we believe will be the future of retail. In the current environment, there is no better time to provide a contactless alternative to ‘click and collect,’” Grant said.

Manna’s custom-built, aviation-grade drones already make about 100 drone deliveries a day in Oranmore, from the Tesco supermarket and the Camile Thai restaurant in town, according to The Irish Times.

Drones mostly have been used for emergency medical deliveries so far. Big retailers and  delivery services -- FedEx, UPS and DHL -- are experimenting with them.  So is Wing, the drone company from Alphabet, the holding company for Google.

Many experiments are happening in smaller burgs, in part to avoid inevitable challenges from larger cities about privacy and safety concerns, and to get the bugs out away from the glare of major media.

Last fall, Walmart began experimenting with deliveries from its store in Fayetteville, North Carolina.  In 2019, Walgreens began making deliveries in tiny Christiansburg, Virginia. Last year, when the pandemic hit, the drugstore chain was able to make drone deliveries in situations where a resident didn’t want to risk going out, or  or just couldn’t  (The list of 155 products included the ability to order crayons, sidewalk chalk and just one roll of toilet tissue.)

But these are early days, and some of the accomplishments can seem silly.  In 2016, Amazon was derided in the British press for its first-ever drone delivery of a package.

Jeff Bezos, Amazon’s founder, tweeted: 'First-ever AmazonPrimeAir customer delivery is in the books. 13 min - click to delivery.' The Daily Mail reported it was a package delivered to a farmhouse from the Amazon fulfillment center in Cambridgeshire, England-- a distance of 765 yards.