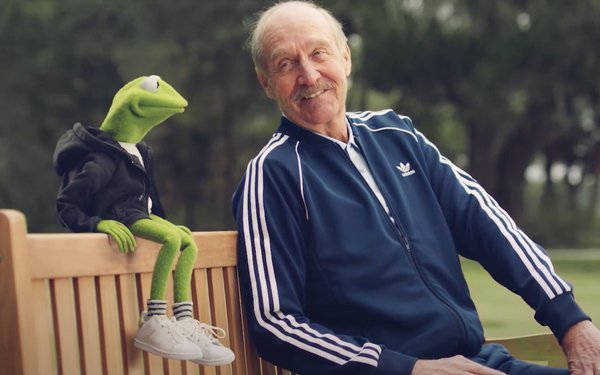 With Gen Z's ever-increasing demand for sustainable apparel, Adidas has just enlisted the greenest ally of all: Kermit the Frog.

The company is launching a new version of its familiar Stan Smith sneaker, with a white upper made from recycled materials matched with a recycled rubber outsole.

The sneaker includes Kermit's name on the heel, his portrait on the left tongue and his memorable environmental advice -- "It's Not Easy Being Green" -- emblazoned across both heel tabs. He even stars in a video for the new line, along with Smith himself.

While it's not the first time Kermit and the tennis icon have collaborated, it is a first in a sustainable model. And Adidas says the introduction is its next step in the company's End Plastic Waste initiative.

Adidas already has a toehold in sustainable shoes with its Parley collaborations, many using ocean trash.

This launch also comes just weeks after Nike's release of ambitious new sustainability goals through 2025 and its continued efforts to lessen its environmental footprint.

But that may not be enough, at least as far as Gen Z shoppers are concerned. For these younger consumers, many still in their teens, climate change is no longer an invisible threat, says Whitney Dailey, senior vice president of marketing and research insights at Porter Novelli.

"It's becoming tangible -- something they can touch and feel," she tells Marketing Daily via email. "They are prioritizing sustainability in their actions and their purchases, even more than other generations."

She says its research finds the environment continues to be the top issue they want to see companies address. "And 84% of Gen-Zers said they would purchase a product or service with a social or environmental benefit."

Dailey says that may be increasingly true for apparel, since sustainable clothing "is an outward way Gen-Zers can show the world how they care without having to say a thing."

COVID-19 has added urgency to their concerns. "They have a real fear that the global health crisis may have diverted attention away from the looming climate crisis," she says.

Almost half (46%) say they're concerned progress on climate action will slow due to the pandemic, while 53% think it is more important than ever for companies to address climate change.

Research from Morning Consult, for example, has shown that Gen Z is least likely of all consumers to trust big brands, with only 22% saying they have either "some" or "a lot" of trust for those entities.

Daily thinks that means newer names, especially if they have sustainability embedded into their core, may well have the edge over bigger brands.

But Adidas and Kermit may have a different advantage, at least according to Porter Novelli's research. "Gen Z is more into nostalgia because they crave stability during this very uncertain time," Dailey says.

In that case, they're in luck. Adidas' new collection also includes shoes with familiar faces like Marvel's the Hulk, Rex from Disney and Pixar's "Toy Story,"  Tinker Bell from "Peter Pan" and Yoda from "Star Wars."