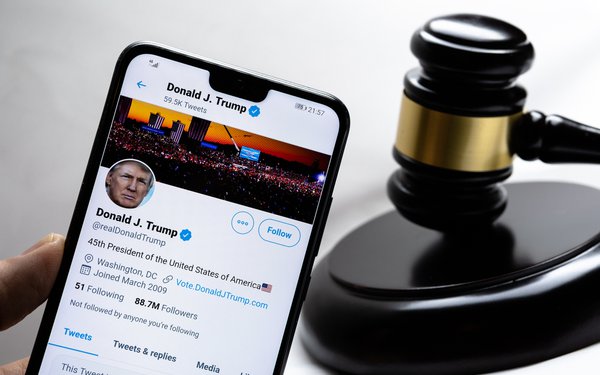 The Supreme Court on Monday granted the Department of Justice's request to vacate a lower court's ruling that former President Donald Trump violated the First Amendment by blocking critics on Twitter.

The Justice Department argued in a filing in January that the dispute over Trump's Twitter account was moot, given that he was voted out of office last year. But the government urged the Supreme Court to vacate the lower court decision anyway, arguing that it could prove “harmful” to other government officials.

The Knight First Amendment Institute at Columbia University, which originally sued Trump on behalf of seven critics blocked by him, agreed that the dispute was moot, but urged the Supreme Court to preserve the lower court's ruling.

The Supreme Court's move brings an end to a battle dating to the first year of Trump's presidency, when the Knight Institute alleged in a lawsuit that he violated the First Amendment by blocking people on Twitter due to their viewpoints. The advocacy group contended that Trump's Twitter account was a public forum -- comparable to city streets, parks and other places where the government can't censor people based on their opinions.

The Justice Department then sought review by the Supreme Court.

After Trump lost the election, the Justice Department argued that the underlying dispute was solely academic, and urged the Supreme Court to dismiss the case as moot and vacate the 2nd Circuit's opinion.

The Justice Department called that opinion “deeply problematic,” and argued it “blurs the lines between governmental and personal actions,” and “exposes federal and state employees to constitutional liability when using their own personal property to speak about their jobs.”

The Knight Institute countered that the 2nd Circuit opinion should be preserved, given the public interest in preventing “viewpoint discrimination in government-operated social media accounts.”

The Supreme Court's decision was only two sentences, but Justice Clarence Thomas authored a 12-page concurrence that drew the attention of industry observers.

In his opinion, Thomas raised the possibility that large tech platforms like Facebook and Google could be prohibited from exercising editorial judgment about users' posts.

“The Second Circuit feared that then-President Trump cut off speech by using the features that Twitter made available to him,” Thomas wrote, referring to the lower court's ruling that Trump violated the First Amendment by blocking critics. “But if the aim is to ensure that speech is not smothered, then the more glaring concern must perforce be the dominant digital platforms themselves.”

Thomas specifically raised the possibility that large tech platforms like Facebook and Google could be treated as either “common carriers” or “places of public accommodation.”

If so, those companies could theoretically be subject to regulations prohibiting them from discriminating against speech based on its content.

“The similarities between some digital platforms and common carriers or places of public accommodation may give legislators strong arguments for similarly regulating digital platforms,” Thomas wrote.

To date, however, judges throughout the country have rejected any attempt to subject large digital platforms to those types of common-carrier requirements.

On the contrary, judges have consistently said that Facebook, Google and other web companies have the First Amendment right to moderate content.