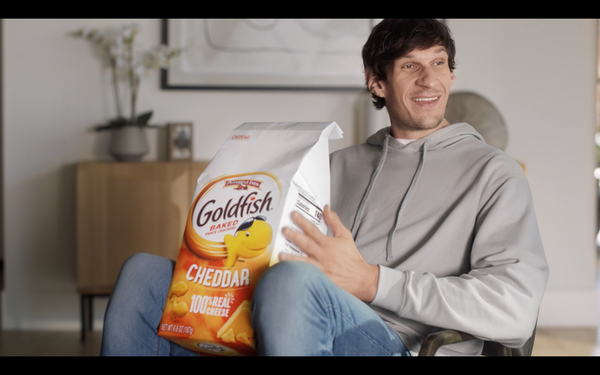 With nearly half of all the Goldfish crackers eaten by adults, Pepperidge Farm is pivoting away from its child- and parent-directed messaging to instead appeal to taller eaters who consume the treats on their own behalf.

Using the 7'4" tall Marjanovic holding 301 crackers in a single handful as the benchmark, participants are invited to post their videos to TikTok with the hashtags #GoForTheHandful and #Contest through April 25.

The 25 most “creative and entertaining” videos will be awarded a special-edition autographed giant bag — jokingly known as Boban-sized — of Goldfish crackers. One TikToker will be made the official “Spokeshand” of Goldfish, winning free Goldfish for a year and appearing in future social media content from the brand.

This creative direction brings together many natural brand elements, explains an agency representation. “We often hear from our adult fans that they go for the handful when they eat Goldfish crackers, so the Tik Tok Challenge became a perfect way for us to share in the handful fun with fans.”

“The friendship between Tobias and Boban is so genuine and so entertaining, we knew they were just right for the brand and this campaign in particular,“ the rep added.

The challenge is just one element in the new campaign, which also features a host of new commercials and video content, centered around the friendly competition between the two athletes.

Although the campaign aims at adults in a new way for the brand, the company will continue its more youthful-directed messaging as well. “We’ve always talked to parents, and we’re definitely not moving away from that,” said Janda Lukin, Chief Marketing Officer, Campbell’s Snacks. “But nearly half of our consumption already comes from adults, so we feel there is a big, untapped, audience out there for a campaign like this.”