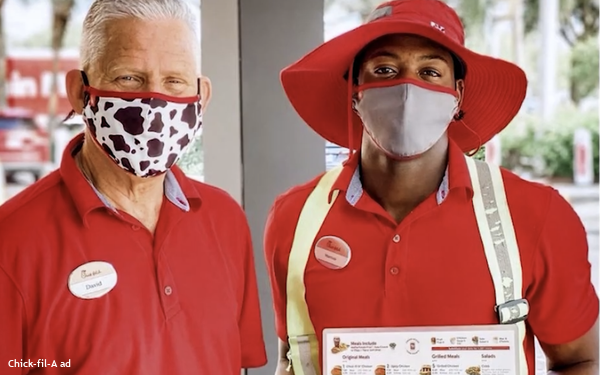 Gen Z is back under the microscope, with new research from Piper Sandler highlighting important changes in the way teens are looking at brands.

The pandemic-driven increase in online shopping shows Amazon has more pull with young shoppers than ever. Food is once again their favorite way to spend money, with Chick-fil-A continuing as the most beloved brand.

They are also more passionate than ever about racial justice, a cause that vaults into the No. 1 spot in the Minneapolis-based investment bank’s twice-yearly research, passing the environment. Black Lives Matter comes in at No. 3.

Piper Sandler, which has been tracking teens spending and brands for more than 20 years, says Gen Z’s self-reported spending ticked up to $2,165 per year. It follows some 7,000 U.S. teens.

With fewer events to spend money on, food is back as teens’ leading expense, with a 23% share of wallet. Chick-fil-A is No. 1, as it has been for seven consecutive surveys. Starbucks maintains No. 2 and Chipotle holds on to the No. 3 spot.

But tastes are changing, with 49% saying they’re eating plant-based meat already or are willing them give it a try. Impossible Foods is the No. 1 selection for plant-based meat, followed by Beyond.

Teens are eager to get back to life with less social distancing, too. Some 69% of the kids surveyed plan to get the COVID-19 vaccine, up from 64% in the fall report. And more are looking forward to dining in restaurants or getting on a flight, while fewer plan to visit a retail store.

When it comes to clothing choices, athletic brands still rule, named by 38% of teens as their preferred apparel. Nike continues its 10-year reign at No. 1, followed by American Eagle, Pac Sun, Lululemon and Adidas. Nike, Vans and Adidas are the top three in footwear.

Teens' passion for the environment shows up in shopping preferences, with thrift and consignment stores jumping up to No. 10 as a favorite retailer, from No. 23 in the spring survey. On average, they earmark 8% of their budget for thrifting, with 47% saying they’ve purchased secondhand goods and 55% saying they’ve sold them.

In social media, Piper Sandler reports that teens love Snapchat and TikTok best, with Instagram losing share and slipping to No. 3. While that doesn’t quite match the results of a new survey from Brooklyn Chatter conducted by Macias PR, it does paint a troubling picture for Facebook.

In the Brooklyn Chatter survey, based on 2,200 respondents 18 to 24, not a single participant named Facebook as their favorite choice for social media. Some 60% called out Instagram, followed by TikTok, at 23%, and Twitter at 10%.