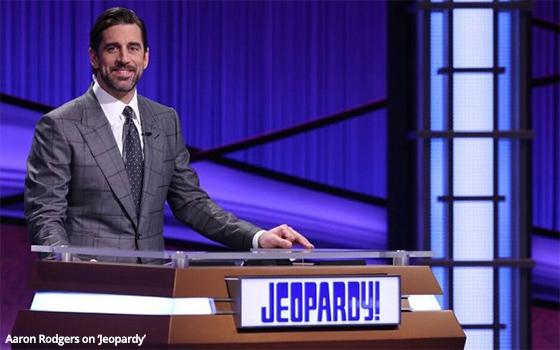 The jocks are shoving the smart kids out of the way once again.

That’s one way to react to the recent news stories reporting that Green Bay Packers quarterback Aaron Rodgers would actually like to become the permanent host of “Jeopardy!”

He reportedly said this in an interview on “The Pat McAfee Show,” a SiriusXM sports-talk show. “I would love to be the host of ‘Jeopardy!,’ yes,” he is widely quoted as saying.

The quote seems somewhat vague and noncommittal, but nevertheless some in the sports-news media are interpreting it as Rodgers’ real ambition for his future after he retires from football -- something he has not yet announced or appears to be planning anytime soon.

The occasion for this interview was Rodgers’ current, short-term gig as guest-host of the revered quiz show. This week marks his second week, of two, in the guest-host position on “Jeopardy!”

It is the same amount of time allotted to some of the previous guest-hosts who have already been on the show -- Katie Couric, Dr. Mehmet Oz and “Jeopardy!” executive producer Mike Richards.

Ken Jennings, the “Jeopardy!” champion who is considered to be the best to have ever played the game, guest-hosted for six weeks.

No one at the show has ever said officially that these guest-hosting stints are actually tryouts or auditions for the permanent host position. To many, including the TV Blog, Ken Jennings has long seemed to be the only legitimate contender.

Among other things, he already works at the show as a producer -- a full-time position he started just last September, at a time when the show’s legendary host, Alex Trebek, was terminally ill with cancer (Trebek died November 8).

Let the record show that Rodgers is doing a fine job as a “Jeopardy!” guest-host -- for a temp. The other guest-hosts were fine too.

While Couric and Oz at least have full-time TV experience, Rodgers comes across as an amateur compared to them -- and compared to Jennings too.

The “Jeopardy!” whiz has been the best of the guest-hosts so far. One reason for this is: As a phenomenal “Jeopardy!” player, champion and obvious genius, he just feels right in the role.

By all appearances, Rodgers is no dummy. When I went in search of his college academic record, I did learn that he scored a 1300 on his SATs, which is impressive (although this was before he went to college).

But I was unable to unearth his GPA while attending the University of California where he was the star quarterback for the Golden Bears. He was drafted by the Packers before he had a chance to graduate, however. He has no college degree.

And yet, this jock says he wants a job that by rights should go to someone more studious, more brainy, and yes, more nerdy.

Interestingly, and no doubt coincidentally, an announcement arrived from NBC on Monday that another jock -- former NFL quarterback Peyton Manning -- will host a revival of one of the brainiest quiz shows in the history of television, the legendary “College Bowl.”

Now sponsored by Capitol One and officially named “Capitol One College Bowl,” this new version of the old show is scheduled to premiere on Tuesday, June 22, at 10 p.m. Eastern.

So now, two jocks who have stood at the pinnacle of the sports world are now moving in on two of the only shows in the television universe where brains are more important than brawn.

Rodgers and Manning might both be great guys who never picked on, or uttered a discouraging word to, anyone less athletic than they. But other jocks throughout the ages have been pretty hard on their nerdier, brainier classmates.

Let the jocks stay on the football field, basketball court or in the sports broadcast booth where they belong. “Jeopardy!” is not for them.