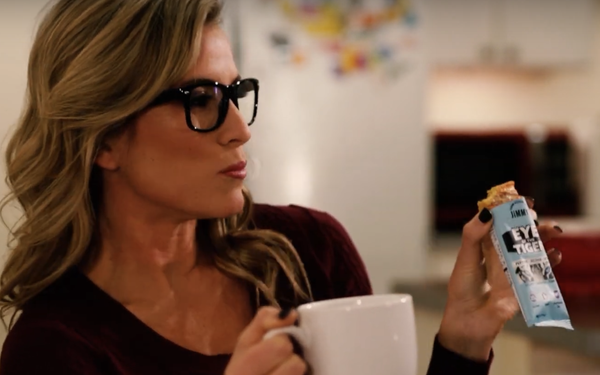 Jim Simon knew nothing about the CPG world when he launched Jimmy Bars in 2014.

A self-described “sales guy” whose background was in technology, Simon couldn’t find a snack bar that was high in protein, low in sugar and tasted good. So he and his chef sister Annette decided to craft their own.

Funded solely by friends and family, Jimmy Bars pivoted in 2018 from date-based bars to a “bars with benefits” positioning and trademarked the term. One example is Eye Of The Tiger, which contains plant-based caffeine, turmeric, and is grain- and gluten-free.

Now sold in seven countries, Jimmy Bars has earned its distribution one channel at a time -- with grocery being the latest, as co-founder and CEO Simon explained in a session during the recent MediaPost Brand Insider Summit.

In this interview, edited for brevity and clarity, Simon talks about pounding the pavement in the C-store space and how the brand uses ambassadors with promo codes to drive store traffic.

CPG FYI: Why did you decide to start distribution in corporate food service?

Simon: When I was in technology, I would go to Google or Facebook headquarters. Their micro kitchens had these incredible snack sections, all of it free. Really good quality food -- not Cheetos or Doritos.

So I said, I’m going to sell Jimmy Bars and I’m just going to go straight to Google, Facebook, Oracle, Intel, etc. It worked for the first four years. We managed to get up to $1 million in sales, we were profitable, and everything was good.

CPG FYI: Why did you initially bypass grocery stores?

Simon: I did pitch some grocery chains and learned a lot of the sort of unspoken evils of the food industry: slotting fees, charge-backs, junk fees. You send a $50,000 bill to a distributor and get a check back for 12 cents. It just didn’t make any sense to me.

CPG FYI: You refer to convenience stores as your favorite channel. Why is that?

Simon: C-stores are actually looking for innovation. You’ve got every innovative brand on planet earth pitching Whole Foods, Sprouts and Costco. So the C-stores don’t get the love. It’s a pound-the-pavement kind of sale, because you don’t have one chain that dominates.

They’re also terrific people to work with. They were so interested in our brand because we were different than an old PowerBar that’s been sitting collecting dust for eight years.

Simon: It’s our last channel -- and that move was on purpose. We’re in Bristol Farms, Meijer, and will be in Kroger shortly. We go where we can make money and there is a true partnership. We won’t do a deal where there’s no path to profitability.

CPG FYI: Besides your own website, what have you done in the D2C space?

Simon: We did the demand-side platform on Amazon for a while for retargeting. That didn’t work for us, so we switched more to their pay-per-click engine. With Amazon, we’re trying to do as much as we can because there really is no second play. Our ROI at Amazon has been really good. I would love it to be 30% of my sales or more.

CPG FYI: On social media, you use ambassadors with promo codes to drive store traffic. How does that work?

Simon: Our ambassadors are usually people who live a healthy lifestyle. We send them free product, and in return they do videos or pictures of them and their families and friends. Every ambassador gets a promo code, and we track sales from those codes.

Yes, getting online sales is fantastic—and it’s quicker, trackable and traceable. But if we can get an ambassador in Australia who can say “head to your local Costco and buy a Jimmy Bar,” we can see a spike in sales and try to correlate that back to the ambassador based on where they live.