BarkBox Gives Up On Domino's But Gets Last Laugh 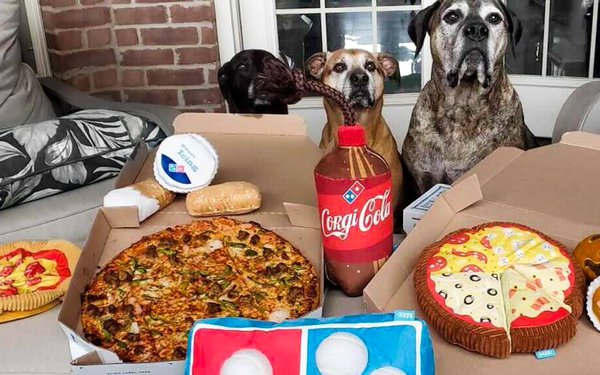 BarkBox has always had a funny bone. And while it appears to be yielding in its latest attempt to get Domino's to play ball, it's winning with laughs on social media.

BarkBox fans already know the subscription-driven company for its co-branded dog toys, like furry Dunkin' coffee cups, the squeaky-toy versions of Glossier's Boy Brow or the faux-food toys it sells in partnership with Shake Shack. And it's always cooking up innovative partnerships, like the new line of Snoopy toys or its homage to "Home Alone."

But while its recent Twitter attempt to pursue a pizza partnership with Domino's failed, getting its fans involved was a win.

"For your consideration, Domino's," it said in its kickoff tweet, complete with photos of toy mock-ups, asking fans to help convince the pizza giant to play ball.

The effort is the latest chapter in what is a long love story. BarkBox people are so enamored of Domino's pizza that company conference rooms are named after favorite flavors.

Domino's didn't respond publicly. But PR Week reports Domino's thinks it has better things to do than horse around with dogs. "Dog-toy collaborations are not something we are pursuing right now, which we have communicated to BarkBox in the past when they have reached out about it," a Domino's spokesperson told the publication.

That didn't slow BarkBox down, with other brands joining in -- as well as numerous consumers, often posting pictures of wide-eyed pups just begging for a pie made of plush.

ShakeShack tweeted, "Do it for the dogs, @dominos!" And Slice, the fast-growing network of local pizzerias, played along too, posting mock-ups on its Instagram, asking for consideration.

No word yet on whether a Slice/BarkBox effort might come to fruition, but BarkBox, at least on social media, proves it has better greeting manners than Domino's.

"THE DEDICATION. THE ARTISTRY. THE ATTENTION TO DETAIL. THE TEARS ON MY FACE BECAUSE THIS IS THE MOST FLATTERED I'VE EVER BEEN," BarkBox replied in answer to the Slice Instagram shout-out.

It signed off on the subject, with an (apparently) final Tweet, with a closer look at the not-meant-to-be pizza, bread sticks and Corgi Cola.  "We asked (begged) Dominos to partner with us and they said no... so anyway here are our Dominos toys!"

And while many of BarkBox's social-media tweets come with plaintive dog pics, this one enlisted a trio of particularly bereft-looking senior pups.

The spoofing proves that Northern Star Acquisition Corp.'s recent acquisition of BarkBox isn't going to suck the fun out of it. That deal, announced late last year, is based on a $1.6 billion valuation for BarkBox.

In its most recent public filings, the corporation says BarkBox continues to grow quickly as it continues to find new ways to help people spoil their pets.

For the third quarter of its fiscal year, sales increased by 78% to $105 million, with subscription shipments gaining 47% to 1.1 million.

The cost of acquiring new customers, an especially important metric for D2C brands, rose to $60.40 from $56.43 in the comparable period. The company attributed that change to a shift away from discounts in favor of media spend. Subscription churn, another important measure, stayed about the same, at 6.2%.

"Our strong revenue growth is the result of our omnichannel sales approach, data-driven platform and consistent customer engagement," says Manish Joneja, chief executive officer of BarkBox, in its announcemnt. He says the merger will provide it "with the resources and capital to help capture the significant growth opportunities in our new business lines and drive continued expansion as we work towards our mission of making all dogs happy."