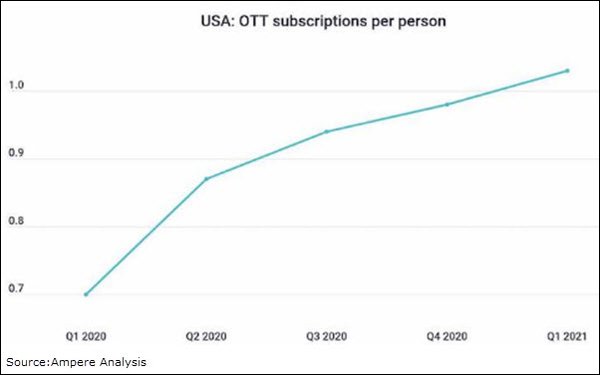 There are now nearly 340 million subscription contracts to OTT streaming services in the U.S., exceeding the country’s 330-million population, according to a new report from Ampere Analysis.

More than half (57%) said that SVODs are the main way they watch TV and film. Two-thirds said they regularly binge-watch TV on the services — more than in any other developed market.

“In 2020, pay TV penetration dropped below 60% for the first time — down from more than 80% at the beginning of 2015 — with  consumers increasingly shifting to SVOD services,” commented Ampere Research Manager Toby Holleran. “Alongside growth from the pandemic, 2020 also saw the U.S. launch of both Peacock and HBO Max, which grew the market even further.”

With other new services entering the market and consumers becoming accustomed to curating their own content/services portfolios, streaming services “stacking” is likely to show continued growth, he said.