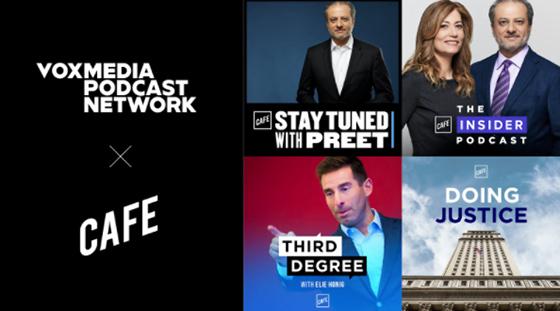 No financial terms were revealed, but the goal is to enlarge the Vox Media Podcast Network.

Founded in 2017, Cafe focuses on the intersection of law with politics, history and business. Cafe will remain intact; Bharara joins Vox Media as creative director of Cafe.

Other Cafe podcasts include "Third Degree,” a legal-analysis show, and “Doing Justice,” a narrative podcast based on Bharara’s book.

Cafe Studios was co-founded by Preet and his brother Vinit Bharara, who also founded Some Spider Studios and Diapers.com.

“Our creators are bursting at the seams with plans for more thoughtful, educational content and, in Vox Media, we earn a partner with a large audience, strategic business and a strong reach across text, video and events,” said Preet Bharara.

Vox Media Podcast Network has more than 200 podcasts, such as “Chicano Squad,”Vox’s “Unexplainable,” Recode’s “Land of the Giants,” “Switched on Pop” and “The Prof G Show.”

Cafe Studios is Vox Media’s fourth acquisition since 2019. Previous acquisitions include Epic, the film-TV studio, Coral, a commenting platform, and a merger with the publisher of New York magazine.