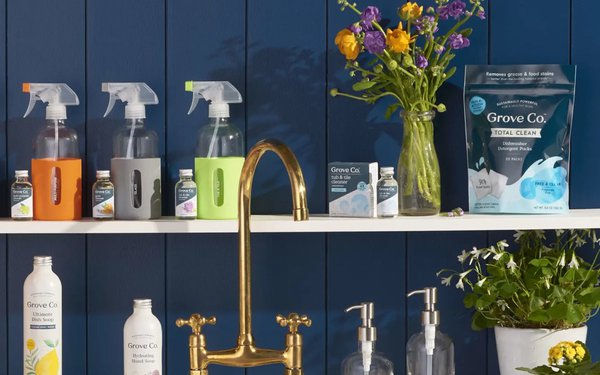 This Earth Week, consumers may notice retailers going for a deeper kind of green, with sustainability looking a little different at Nordstrom, Target and Whole Foods Markets.

To a large degree, shoppers are aware that the climate crisis didn’t go away because of the pandemic -- and in fact, it got worse. Data from the People’s Climate Vote, a massive survey from the United Nations, reports that 65% of Americans believe the planet faces a climate emergency. Among those 18 and under, that rises to 75%.

Retailers are keenly aware of the problem. And while they are intensifying deeper sustainability efforts -- the types of changes consumers often can’t see -- they’re also stepping into more shopper-facing actions.

Target, which has long used Earth Week to showcase its sustainability efforts, is cueing up a collection of new brand collaborations, private-label extensions and environmental projects.

Among them is a partnership with Grove Collaborative, a D2C brand making its first appearance in a physical retail setting. The CPG brand, built on a mission of eliminating single-use plastic, offers a small collection of some of its best-sellers, including signature cleaning concentrates, along with reusable glass dispensers and spray bottles. It’s even cooked up a Target-exclusive scent, called Citron & White Rose.

Those who belong to Target Circle, the retailer’s reward program, can earn another 15% discount on certain products, including those from brands like Universal Thread. Target is also introducing a new line of storage products from Matter, featuring compostable items that use natural, renewable and sustainable materials.

The retailer is adapting Spritz, its party-supply line, to include three new collections that include recyclable bags and wraps, as well as plates, cutlery and cups that can be composted. It says the achievement is a result of almost two years of research.

Loyalty members also get the chance to steer Target donations to the Arbor Day Foundation. Since its launch, Target Circle members have directed $500,000 to green nonprofits.

Whole Foods Market is introducing Sourced for Good, a new third-party seal to help people pick products that support workers, communities and the environment. The Austin, Texas-based chain, owned by Amazon, says the new effort is supported by research that 81% of Americans would like an easy way to know if products are responsibly sourced.

Its research, done by the Harris Poll, also finds that 65% of Americans are confused about determining sourcing. For now, the seal is found on about 100 products, ranging from asparagus to tulips to seafood.

“As we approach Earth Month, there’s no better time to encourage our customers to go down a more sustainable path and help them discover products that make it easy to get there,” said Olivia Kim, vice president of creative projects, in Nordstrom's announcement.

While American awareness of the climate crisis is high, it’s still substantially lower than in other countries. Belief that the climate is in an emergency is highest in the U.K., at 81%, followed by Italy, Japan, France and Germany. OF the 37 countries ranked, the U.S. came in at No. 21, just after Russia and before Algeria.