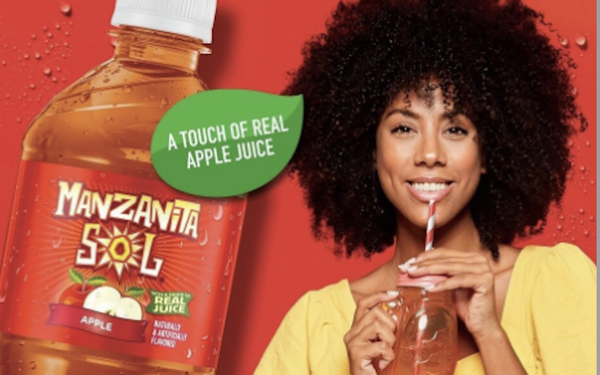 PepsiCo thinks New York is ripe for apples -- and that mangos will appeal to reality TV dating fans.

This weekend, PepsiCo is supporting food trucks as part of a campaign to support the expansion of its apple-flavored Manzanita Sol soda to the Big Apple.

Manzanita Sol (“little apple sun” in Spanish) launched three decades ago in Mexico and has been available in the United States for about 15 years, according to Yasmin Grant, PepsiCo’s director of marketing, Hispanic business unit.

“The brand is beloved and very well established in the West and Southwest because of its Mexican origin,” Grant tells Marketing Daily.

On Saturday and Sunday in New York City, four trucks that specialize in Puerto Rican, Dominican, Jamaican and Trinidadian foods will give each of its customers a PepsiCo-funded free meal and 20-ounce bottle of Manzanita Sol.

In addition, PepsiCo is awarding each truck owner a $10,000 grant—in line with The PepsiCo Foundation’s commitment to invest more than $570 million in Black and Hispanic businesses and communities over five years.

“It’s a giveback to supporting these Black and Hispanic vendors who work tirelessly to provide authentic meals from home to their communities,” says Grant.

Along with digital platforms, the campaign is being publicized via out-of-home placements and radio ads featuring Brooklyn native Angie Martinez—a radio personality nicknamed “the voice of New York.”

It comes on the heels of PepsiCo’s announcement this week that it’s partnering with ViacomCBS’ MTV on a new reality dating series called “Match Me If You Can” to promote the nationwide launch of Pepsi Mango, the brand’s first permanent flavor introduction in five years.

Pepsi Mango and MTV’s “Match Me If You Can” dating series will be hosted by Lauren Speed Hamilton, star of reality series “Love Is Blind.”

It will feature reality television personalities from such shows as “The Bachelor,” “Love Island,” “Are You The One?” and “The Challenge.”

The first episode will debut in the form of commercial break takeovers during the finale of the 36th season of the “The Challenge: Double Agents.” The rest of the series will run on MTV’s YouTube channel and Pluto TV.

“With the explosion of reality dating shows and online dating apps, it’s clear people are continuing to look for new and different ways to find their perfect match,” Pepsi vice president of marketing Todd Kaplan said in a news release.