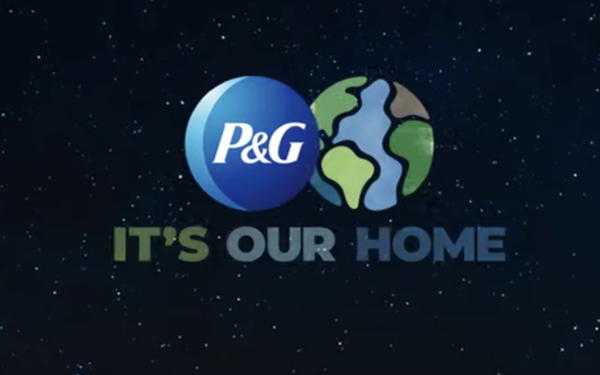 In its latest push to encourage sustainability, Procter & Gamble has a new short film for Earth Week that shows a dutiful little girl bouncing around her home, turning off lamps and water faucets and making sure the refrigerator is opened and shut quickly.

The girl, we soon discover, is Louisa, who in the first frames shows up seemingly floating in the air in a spacesuit. She declares, “I, Louisa, explorer of galaxies, officially declare your planet my home. As your leader, I have one demand. With every action, you will take care of it.  Under my watchful eye, resource conservation is vital. Energy shall be used wisely.”

The one-minute film, which will debut online this week, has the double-duty title, “It’s Our Home.”

New P&G data says 72% of people want to be part of the sustainability effort, but that fewer than half make “environmentally conscious choices” at home. Why? Most don’t know where to start.

Cincinnati-based P&G previously declared it aims to do “2,021 Acts of Good in 2021” in areas ranging from acts of kindness to racial justice to producing sustainable and environmentally sensitive products, where it faces some critics.

The CPG giant, one of the top advertisers in the world, also started P&G Good Everyday this year, a reward program for consumers who do the right thing in a variety of ways -- including washing  their clothes in Tide’s cold water variety.

P&G’s “It’s Our Home” announcement notes that  “in 2010 P&G made a commitment to have 70% of all washing machine loads be low-energy wash cycles by 2020. P&G reached that goal in 2019 and estimates that since 2015, the avoided emissions from U.S. consumers increasing their use of low-energy laundry cycles have been roughly 15 million metric tons of carbon dioxide.”

Many marketers are now crusading for causes in ways they wouldn’t have dreamed of just a few years ago -- but few companies  have  been more aggressively public about it than Procter & Gamble.

"Meaningful change starts at home, and P&G brands have a big role to play – by helping consumers live more sustainably with no tradeoffs in the superior performance they expect from our products,” said David Taylor, P&G chairman and CEO, in a statement.

Among the environmentally sensitive steps it’s taking include: “For every tree used to make Charmin toilet paper, at least two more are regrown.”  It pledges to plant one million trees by 2025 in areas hit by natural disasters.

That effort apparently hasn’t impressed some environmental critics. On March 31, the group Stand.earth demonstrated in the Cincinnati area, charging that “P&G is complicit in the destruction of the world’s critical primary forests — including in the boreal forest of Canada, where the company sources some of its fiber to make products like Charmin — and its supply chain issues are a reputational and financial threat to the company.”

At last year's annual company meeting, a surprising 67% of investors voted to request P&G “issue a report assessing if and how it could increase the scale, pace, and rigor of its efforts to eliminate deforestation and the degradation of intact forests in its supply chains.”