Bronx Zoo Urges New Yorkers To Get Off Zoom 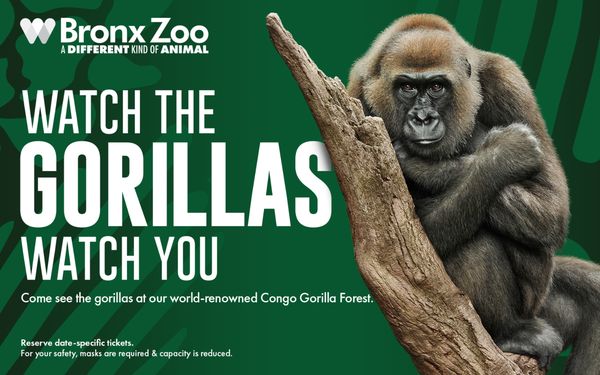 As more people get vaccinated for COVID-19, New Yorkers are starting to come out of hibernation.

Feeding into that trend, via a campaign from lead agency Six+One, the Bronx Zoo is urging residents to leave their homes, look away from their screens, and reconnect with nature.

Gov. Andrew Cuomo announced zoos and museums can expand to 50% and movie theaters can go to 33% capacity next week.

Starting this week, the OOH initiative will launch on digital and static billboard in 350 Metro-North stations in Manhattan, Queens, the Bronx and Westchester, and throughout Chelsea Market, Brookfield Place and Grand Central.

This is the first major campaign under the “Different Kind of Animal” platform, which first debuted fall 2020.

Creative includes photographs of the Bronx Zoo’s animals along with tongue-in-cheek copy about pandemic-era life. For example, “A meeting you won’t want to get out of” is displayed above a group of lemurs, while “Close your tabs and open your eyes” is shown next to an owl.

“People are looking for glimmers of hope, to connect with each other and nature once again and what better way to connect with nature than to be surrounded by wildlife,” says Eric Rojas, Six+One founder and creative director, in a release.

The Bronx Zoo is one of the largest zoos in the United States by area, comprising 265 acres of park lands and naturalistic habitats separated by the Bronx River.