Acorn's Hard-Boiled 'Backstrom': How Swede It Is 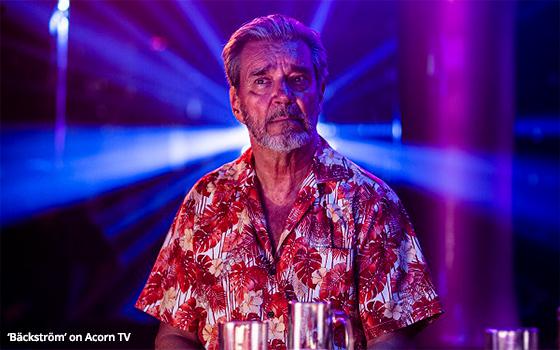 The grizzled detective named Backstrom was last seen in America in the winter of 2015 without his umlauts.

Now, he’s back with umlauts restored in “Bäckström,” an import from Sweden that starts streaming this week on the service known as Acorn TV.

Sweden happens to be the native country for the character, police Detective Evert Bäckström, who was created by Swedish author Leif G.W. Persson for a series of three books (so far) starting in 2005.

In the short-lived “Backstrom” series on Fox, the detective’s first name was Everett, his last name had none of the requisite Scandinavian punctuation, and the setting was moved to Portland, Oregon.

Rainn Wilson, who is best-known for playing Dwight Schrute on “The Office,” got the lead role, and played the character -- unconvincingly, as it turned out -- as a cigar-chomping misanthrope.

The TV Blog’s review of the show in January 2015, which I reread last Friday, indicates that Fox sent critics and TV reporters copies of one of the original Backstrom novels (in English) -- the one titled He Who Kills the Dragon -- so that we might familiarize ourselves with the character.

My review says I read at least part of the book, of which I have no memory, along with the book itself, which I must have discarded.

But I apparently read enough of it to conclude that the book’s version of the Backstrom character was “even more bigoted than he is in his portrayal on the TV show.”

I then gave an example of a racially charged statement the book’s Backstrom said, plus a few uttered by Rainn Wilson’s Backstrom.

The point is this: In the book (and the subsequent American TV show), Evert Bäckström is almost wholly unlikable. He is stubborn, impatient and racist. He is overweight, and he drinks and smokes too much. As a result, he has serious health issues that he chooses to ignore.

The only reason anybody puts up with him is because he is a brilliant detective when it comes to solving the most difficult murder mysteries.

In this new “Bäckström,” the title character shares that particular trait with the original character. But after watching the first two episodes of the new, Swedish “Bäckström,” it appears evident that the character’s rougher edges have been smoothed quite a bit.

He is still impatient with underlings and intolerant of supervisors. But there is no sign of his racism. He does enjoy alcohol, but hardly enough to lose control. And if he still smokes, he was doing none of it in the two episodes I watched.

The Swedish Bäckström is played by Kvell Bergqvist (pictured above). The setting for the show is Sweden, but the city is not specified (although I suppose an educated guess would be Stockholm).

The show is in Swedish with English subtitles -- including a relatively frequent use of the f-word, which I could have done without having to read repeatedly on my laptop screen.

The show’s principal mystery is built around two seemingly unrelated elements -- a brazen daytime armored-car robbery and the discovery of a skull with a bullet hole in it.

While struggling to put the mystery’s many pieces together, Bäckström also finds himself swimming against an undercurrent of police department politics characterized chiefly by a new supervisor who sees Bäckström as a rival and seeks to sack him.

Judging by the first two episodes, in which the show’s parallel (and possibly connected) storylines are not nearly resolved, it seems as if it may take most, if not all, of the “Bäckström” season to wrap them both up.

That is not a problem, however. On the contrary, “Bäckström” provides plenty of good reasons to binge-watch, and getting eventually to the resolution of the show’s twin mysteries is just one of them.