With 'If 5G Were . . .' Comparisons, T-Mobile Makes Some Blanket Claims 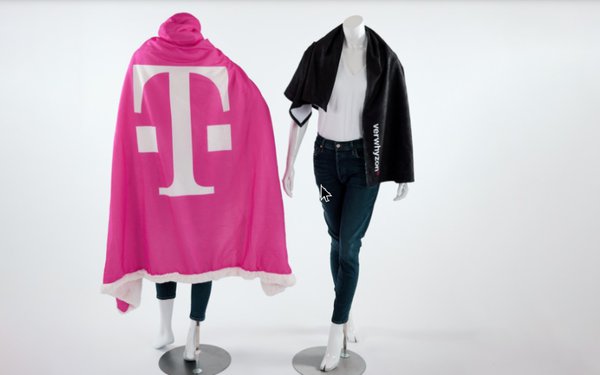 T-Mobile rarely misses an opportunity to compare itself to Verizon and AT&T. It’s at it again with a social media campaign (running on Instagram, Facebook and Twitter)  that compares its 5G coverage area with that of its two wireless competitors.

The company's latest example is headlined,  “If 5G were blankets. . .”  It is accompanied by a photo of two mannequins, one draped in a magenta blanket large enough that it seems to resemble a heavyweight champion’s cloak. The blanket on the mannequin next to it seems to be about the size of a bath towel. An inscription on it reads “Verwhyzon,” the punny name T-Mobile has used to refer to Verizon in the past.

The text reads, “It’s no secret that T-Mobile is blanketing the country with 5G coverage but just how much blanketing might surprise most wireless users. In this installment of ‘If 5G Were…’ we’re using blankets to show just how much of a difference there is between T-Mobile and the Carriers."

T-Mobile calls itself the un-carrier, an underdog name it picked up when it was the smallest wireless carrier. Since its merger with Sprint, T-Mobile is now bigger than AT&T and in the estimation of many people who chart these things, has the best coverage.

The first time T-Mobile played this game, in late December, the ad was titled, “If 5G were snowpeople, they’d look like this.” The text explained, “We got into the winter spirit and built three snowpeople on the Brooklyn shoreline looking out toward lower Manhattan. If 5G Were Snowpeople, T-Mobile would tower over six feet tall, AT&T is under half the size and Verizon is just a couple feet tall, about a quarter the size of T-Mobile’s nationwide network.”

The blanket example, introduced Tuesday, is explained this way: “At 1.6 million square miles, T-Mobile’s 5G network is over 2x the size of AT&T’s and nearly 4x the size of Verizon’s!"

In the social media era, companies that make rough comparisons to their competitors are asking for blowback, and on Twitter, T-Mobile got enough of it.  Several tweets referred to specific problems they had with T-Mobile service, or that their 4G service worked better than the 5G upgrade. But many also suggested other “If 5G Were” comparisons. If T-Mobile 5G were an airplane, “it would have destinations all over the country,” read one.  If 5G coverage were an animal, “T-mobile would be a cheetah and the other brands sloths.”