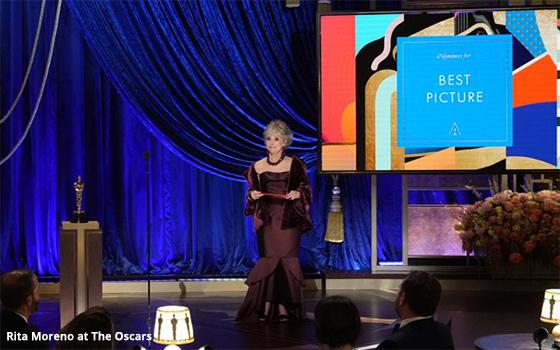 “What a bore!” I once wrote to lead off a morning-after review of an Oscar telecast. “Last night’s Oscar telecast was among the most tedious ever.”

Sound familiar? Yesterday's TV Blog repeated the same refrain: “Most boring Oscars ever,” I wrote, quoting a friend’s text received during the show.

The “What a bore!” review was published in one of our local New York papers on March 1, 2004, proving that the more things change, the more they stay the same -- an adage that is as appropriate for TV columns as it is for anything else. The Oscar host that year was Billy Crystal.

In the aftermath of this year's dismally low-rated, host-less “93rd Oscars” (official title) on ABC Sunday night (Egads … only 9.8 million viewers!), critics from coast to coast panned the show for its lethargy, its lack of basic entertainment value and for the preaching and sermonizing of its presenters, nominees and winners.

The headline on yesterday's blog is here: “Oscars So Dull: Millions Say No To Movie Biz Boredom.” And here is a line I could have written for that review: “[The] ABC telecast … will likely be remembered as the dullest, most bloated Academy Awards ever.”

The problem is, I already wrote that once before, in 2007 for the Oscars that year hosted by Ellen DeGeneres.

One reason it stands out in my memory is because a reader reacted angrily to that characterization of the Oscar show that year and I vividly remember this reader's response: “The only thing that's dull is the s*** in your head, you loser!” wrote this reader in an email (a true classic).

Scanning the yearly Oscar reviews published here on MediaPost over the last half-decade or so, I find many of the same themes, words, criticisms and complaints.

In February 2016, I noted the “joylessness” of the Oscar telecast hosted by Chris Rock. “[While watching the show],” I wrote, “I concluded that beneath all the jewelry, gowns, tuxedos and money, Hollywood apparently seethes with dissatisfaction. Last night during the telecast that is supposed to promote it in all its shining glory, Hollywood came across as the unhappiest place on Earth.”

This week’s Oscar review said much the same thing: “The speeches and other elements were so downbeat in Sunday's Oscar telecast that I came to the conclusion -- again -- that Hollywood must be just about the saddest place on Earth.” Sorry ’bout that.

Then, in February 2017, the TV Blog review adopted a different tone for an Oscars that was enlivened by the epic screw-up of “Bonnie and Clyde” co-stars Warren Beatty and Faye Dunaway as they closed the show by announcing the wrong movie as the winner of that year's Best Picture Oscar.

Maybe that socko finish put me in a more forgiving mood where the rest of that Oscar show was concerned. “Perhaps it is because after nearly 20 years of writing these [morning-after Oscar reviews], I am finally realizing that the Oscars are impervious to criticism,” I wrote then.

Oh, well. This attitude of acceptance lasted all the way up to the 2018 Oscars, and then it was back to business as usual. Adjectives used here to describe the telecast that year included “choppy, meandering, overlong,” “torturous,” “boring” and “atrocious.”

The refrain remained the same in February 2019. “The Oscars were so boring that it was possible to wonder why on Earth we watch this thing every year,” I wrote then, identifying a conundrum that is still relevant today.

I went on to write that the Oscar show that year “was stupefying, bland, dull and charmless.”

A little more than a year ago, in February 2020, a speech at the 2020 Oscars delivered by Oscar winner Joaquin Phoenix -- in which he decried humanity's reliance on cows for milk and meat -- was so sensational that just about the entire review here was devoted to it.

Maybe that's what the Oscars need every year -- someone like Joaquin Phoenix who is not afraid to put the “Moo” in movies.