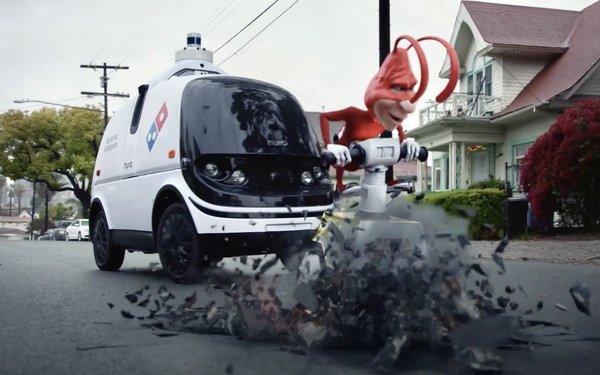 Having debuted in 1986, the villainous Noid character is back for Domino’s Pizza—and he’s not exactly thrilled with the chain’s ongoing test of self-driving pizza-delivery vehicles.

That's abundantly clear in new commercial spots in which the angry Noid—long known for his attempts to prevent pizza delivery—does what he can to try to sabotage the four-wheel R2 robot from self-driving delivery company Nuro.

On April 12, Domino’s launched autonomous pizza delivery with Nuro at one location in Houston. Select customers who placed prepaid website orders were provided with a unique PIN to enter on R2’s touchscreen upon arrival to open its doors.

In this 30-second spot, the Noid is back to his old habits as he tries to pilot a “pizza crusher” into the path of a homebound Nuro. When that doesn't work, the Noid then makes dazzling contact with overhead power lines before cutting down a tree and causing a traffic jam—but the Nuro rolls on.

“We’ve talked about bringing the Noid back for more than a decade, and it has popped up from time to time in small ways,” Kate Trumbull, Domino’s vice president of advertising and Hispanic marketing, tells Marketing Daily. “But it wasn’t until we began pursuing autonomous delivery that we felt we had the right moment, and pizza delivery technology, to trigger a true return of the Noid. We began seriously discussing the idea just about two years ago.”

The television portion of the Noid campaign was conceptualized and developed by creatives at Crispin Porter & Bogusky who have since joined WorkInProgress—the creative agency for Domino’s since January. The spots were produced by Arts & Sciences.

To engage with consumers on mobile devices, WorkInProgress landed the Noid an in-game role in the latest installment of the Crash Bandicoot gaming series, “Crash Bandicoot: On the Run!”

Starting May 7, the Noid will be featured as one of the game’s “mini bosses,” pitting players against him as Crash progresses through the story.

Domino’s advertising featured the Noid from 1986 to 1995 to underscore the challenges of delivering pizza in 30 minutes or less. His return comes as Domino’s continues to resist partnering with third-party delivery services and their attendant fees while using its own drivers.

“In 60 years, we've never made a dollar delivering a pizza,” Domino’s Pizza Inc. CEO said in a Feb. 25 earnings call with financial analysts. “We make money on the product, but we don't make money on the delivery. So we're just not sure how others do it.”

As Domino’s seeks to “shrink our delivery area to get closer to our customer for better service, a lot of these third parties are trying to expand to reach more customers—which we think just takes away from service.”

Nuro’s fleet of driverless Prius vehicles have been used in Houston by CVS, Kroger and Walmart. The company received California's first permit for deploying commercial, self-driving vehicles in the state.

Last month, Chipotle Mexican Grill took part in a fund-raising round in which Nuro raised $500 million.

“Nuro could change the traditional delivery model and we believe consumers are going to continue to seek options and additional access points for how and where they enjoy their food,” Chipotle chief technology officer Curt Garner said in a company statement.