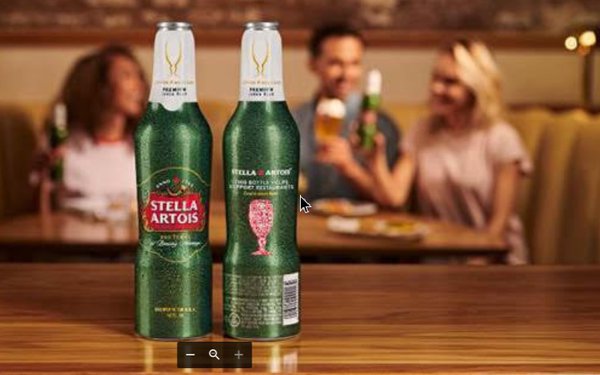 Aiming to get restaurant and bar patrons back into the swing of things, Stella Artois will soon introduce a sleek aluminum bottle, with some proceeds going toward the James Beard Foundation’s Open For Good program.

That effort offers help to restaurants that may be struggling to survive. Though the pandemic may have lifted -- or while many Americans believe it has -- restaurants aren’t out of the woods. The James Beard Foundation says 80% of restaurant owners still say closing their doors is a distinct possibility.

The new bottle, bright green and lettered with what Stella Artois’s announcement says is “premium inks,” will also carry a QR code the shape of a chalice on the back side that allows patrons learn about the fund and nominate restaurants to be on the receiving end of assistance. The new bottles will show up exclusively at on-premise locales like restaurants and bars.

Stella Artois is a longtime supporter of the foundation, which has done “all we can to help the independent restaurant industry survive by providing financial grants,” said Clare Reichenbach, CEO of the James Beard Foundation. The organization also conducted more than 80 webinars to help the industry get by, and help applying for PPP federal loans that in many cases do not have to be repaid.

Marketing platform lBentoBox last week released its Restaurant Delivery Consumer Trend Report, which reported that more than a third of consumers say they are hesitant to resume their old eating-out habits.

Stella Artois, owned by Anheuser-Busch InBev will soon be introducing a new campaign, “Your Table Is Ready,” dedicated to bringing customers back, which will feature new TV ads, social and out-of-home promotions and what it terms “experiential activations” to get people out to drink and eat.

That’s part of the Anheuser-Busch’s overall “Let’s Grab A Beer” campaign that, none-too-subtly, is trying to rekindle consumers’ interest in a bit of a nightlife. Major beer brands can get 40% of their sales from on-premise consumption. During the pandemic last year, that dried up to just a trickle, especially with games played in empty, or mostly empty stadiums.

In February, when Anheuser-Busch InBev announced its annual earnings, it warned, “Although sales in the on-premise channel have begun to improve as a result of the easing of social distancing and lock down measures in many of these markets, such improvements may be impacted by the implementation of restrictions in certain markets.”  It added, "if the COVID-19 pandemic intensifies and expands geographically or in duration, its negative impacts on our sales could be more prolonged and may become more severe.”