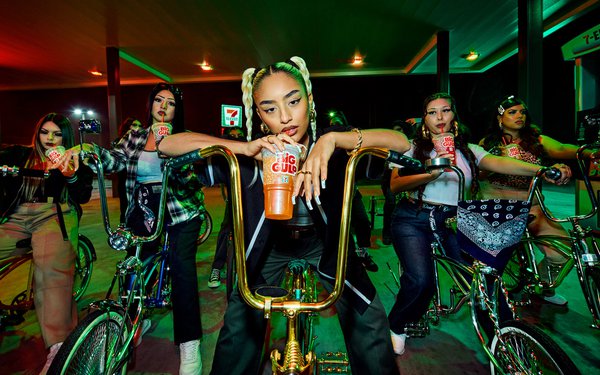 To remind Gen Z that 7-Eleven’s parking lot is where all the cool kids are, the convenience-store giant is doubling its marketing budget for a campaign that celebrates self-expression.

Themed “Take it to 7-Eleven,” the campaign is from 360i and includes TV spots for the first time in six years. It hinges on the insight that consumers see the chain as an “ingenious accomplice” to all kinds of things that make them happy: late-night taquitos, Big Gulps, Slurpees, and plenty of coffee.

“That idea inspired us to take a closer look at all the ways our customers work hard but bring themselves to us when they shop,” says Marissa Jarratt, its senior vice president and chief marketing officer. Spots celebrate that individuality and diversity, including pompadour-wearing rockabilly-ites, late-night punk rockers, limber roller-skaters, and a pack of adorable teenage low-riders.

Jarratt says the campaign grew from a year of intense research about what the brand now -- and could -- mean to its audience. Yes, she says, it is still the place people run for a cup of coffee before work or at 3 a.m. for children’s Tylenol. “But we also offer some of the fun-for-you items that are just amusing, like a Slurpee.”

She says Gen Z is a critical audience. “We would like to capture a larger share of their shopping,” she tells Marketing Daily.

Part of the issue is that 7-Eleven, while a convenience brand by its very definition, doesn’t mean what it used to. Many retailers are stepping up digital, delivery and seamless offerings, so “it’s no longer enough just to be convenient,” Jarratt says. “We have to provide a great assortment. We’ve been broadening our food and beverage line.

"And this campaign is a way to remind people of how much we have to offer, especially as we compete more broadly with other retailers and QSR restaurants. We’re operating in a different landscape.”

The company has doubled its marketing spend in the last year and is investing over $70 million in the new campaign. Since 2018, it’s also been investing heavily in digital offerings. Its delivery option has been particularly successful, with volume up five times during COVID-19.

Jarratt says the ads are set to run on TV and cable in 22 markets, with supporting radio and outdoor buys. The company’s also using digital display, programmatic and paid search, as well as all its own channels.

Beyond the primary goal of increasing sales, the hope is that the new push encourages repeat visits. “We’re interested in building relationships with our customers, so we’re watching their basket size and assortment closely.”

The effort comes at a rough time for the convenience-store category, with the industry shrinking by roughly 1.6% in the U.S. in the last year, according to the 2021 NACS/Nielsen Convenience Industry Store Count. Convenience stores sell about 80% of the fuel bought in the U.S.,  and Americans drove less because of the pandemic.