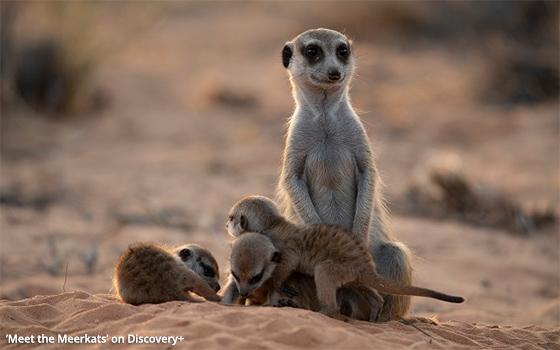 What’s the latest scheme for boosting viewership and attracting subscribers to Discovery+?

Remember Meerkat-Mania? That was a craze that flared ever so briefly within the years 2005-08 when a meerkat reality series on Animal Planet captured the imagination of many, and emerged for a short time as one of the most talked-about unscripted series on TV.

Filmed in the Kalahari Desert of South Africa, the show was called “Meerkat Manor,” and it featured several families (sometimes known as “mobs” or “gangs”) of close-knit meerkats going about their lives.

Their lives consisted chiefly of searching for food, and avoiding becoming food for someone else. In addition, as revealed in some old clippings I possess of stories I wrote about “Meerkat Manor” back then, they were also challenged to avoid being killed by trucks traveling on a highway either through or adjacent to their Kalahari home.

At least one of them, a female fan favorite named Rocket Dog, perished under the wheels of a fast-moving overland truck -- one of nine meerkats that died during the original run of “Meerkat Manor.” The others died of more “natural” causes such as snake bites, according to a story I wrote in June 2008.

Now, 13 years later, Discovery must feel that the requisite period of mourning for the beloved Rocket Dog and the others has come and gone, and it is time once again to return to Meerkat Land for a new series called “Meet the Meerkats,” premiering this weekend on Discovery+, the Discovery-owned streaming service.

For those who loved “Meerkat Manor” and possibly even miss it, let the record show that this new one contains everything they came to love about the old show.

Like “Meerkat Manor,” the meerkats in “Meet the Meerkats” have all been given cute names and bestowed with distinct, human-like personalities.

For example, one of them is depicted as lazy and sleepy (although there were no meerkats named Grumpy or Sneezy seen in the first episode that the TV Blog previewed this week). Another one is described as a loner who feels lost and unconnected, like an angst-ridden teen.

Another trait that “Meet the Meerkats” shares with “Meerkat Manor” is the quality of its production. Even at times when the so-called “action” on the screen amounts to little more than a pair or trio of meerkats inspecting each other’s fur for fleas, the pictures are gorgeous.

Dangerous and inhospitable, the Kalahari is nevertheless a compelling landscape in which to set a nature reality series.

But the suggestion in the headline on this blog -- that Discovery+ wishes to “reignite Meerkat-Mania” -- is more tongue-in-cheek than serious.

Even as recently as 2005-08, it was possible for a reality show on a relatively small niche network such as Animal Planet to make a splash and make itself known in the popular culture, at least for a while.

But not anymore. It is hard to imagine a new series for a streaming service igniting a “craze” or “mania” in the manner of the TV networks of old -- even Animal Planet.

Plus, in another example of how the streaming services have become the top priority for TV companies such as Discovery, this new meerkat show is not even going to Animal Planet, where it preferably once belonged, but straight to streaming.

It is reasonable to argue that “Meerkat Manor” was the most memorable show in the history of Animal Planet. But with “Meet the Meerkats” going straight to Discovery+, Animal Planet will not have an opportunity to find out if meerkat lightning can strike twice.

“Meet the Meerkats” starts streaming on Saturday (May 8) on Discovery+.