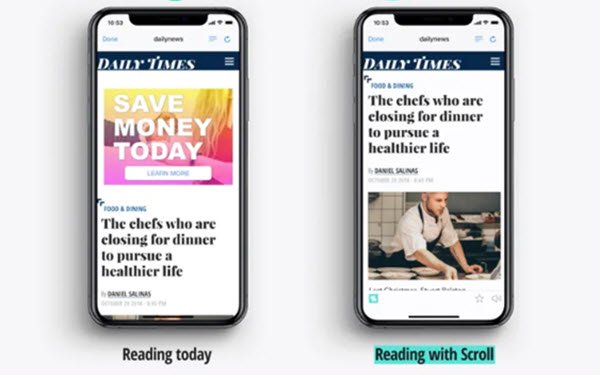 Scroll, which charges $5 per month, is going into private beta with Twitter in preparation for being incorporated in a broader subscription service later this year, Scroll CEO Tony Haile said in a blog post.

That service will also include the Revue newsletter service, which was also recently acquired by Twitter, and other homegrown Twitter services, according to The Verge, which participates in Scroll.

Other participating sites include The Atlantic, USA Today, The Sacramento Bee, The Philadelphia Inquirer and The Daily Beast.

Haile said Twitter has charged Scroll with scaling its platform and model “so that everyone who uses Twitter has the opportunity to experience an internet without friction and frustration, a great gathering of people who love the news and pay to sustainably support it.”

Scroll, which for now will not take new subscribers, uses third-party cookies or browser extensions to tell participating sites not to send ads, and sends part of the subscribers’ fee to the sites they visit.

Scroll agreed to be acquired by Twitter because Twitter is “the only large platform whose success is deeply intertwined with a sustainable journalism ecosystem,” Haile wrote.

“Twitter’s ambitions are larger than people suspect,” he added. “The burst of innovation and activity we are now seeing is the output of a team that are thoughtfully, methodically putting together the capabilities to meet those ambitions.

“Twitter is absolutely building a subscription service that will put together a bunch of services, but what exactly will be included, what it will cost, and who will share in the revenue is only known to Twitter,” sums up The Verge.

Nuzzel, a separate service from Scroll that sends daily emails showing the stories most-shared by people in users’ Twitter feeds, will be shut down on May 6, but its “core elements” will eventually be incorporated in Twitter, according to the platform.