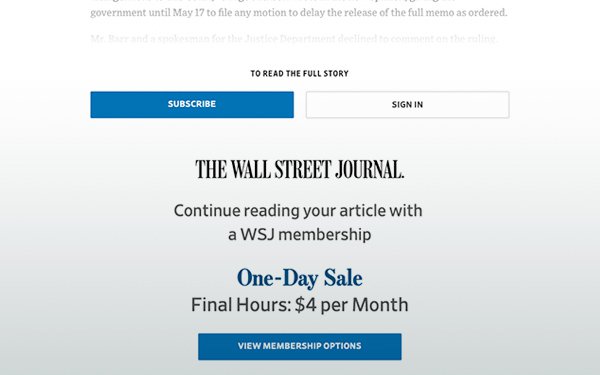 Hard paywalls — those that force the user to subscribe to continue reading — pull a conversion rate that is 10 times higher than the one for soft paywalls, according to the Subscription Performance Benchmark Report, a study by Piano.

Moreover, paid trials have an 82.1% retention rate when the trial is over, even if the price is as low as $1. In contrast, free trials retain only 61.7% when the user is asked to start paying, and those subscribers have a much lower lifetime value.

And paid offers are on the rise — by Q4 last year, 15.9% of website visitors to longer-tenure sights were seeing them, versus 4.9% during the same period in 2019.

In December 2020, less than 5% of monthly subscriptions had a free trial, versus 17% in January of that year.

In another key finding, Piano found that retention is higher for monthly subscribers who signed up after the pandemic, the monthly COVID-19 bump hitting 43.58% in December.

In general, churn rates peak during the first month, totaling 20.3%, compared with 5.2% after eight months. Subscribers who fail to engage early often cancel quickly or become “doomed sleepers” who stop visiting the site even if they remain subscribed, the study notes.

Sleepers, those who haven’t visited the site in the past 30 days, comprise 40% of the subscribers to the average media site.

The findings are based on client activity on the Piano platform.

It pays to encourage longer-term subscriptions. Only 46% of monthly subscribers remain after the first year of a subscription, versus of 74% of annual sign-ups.