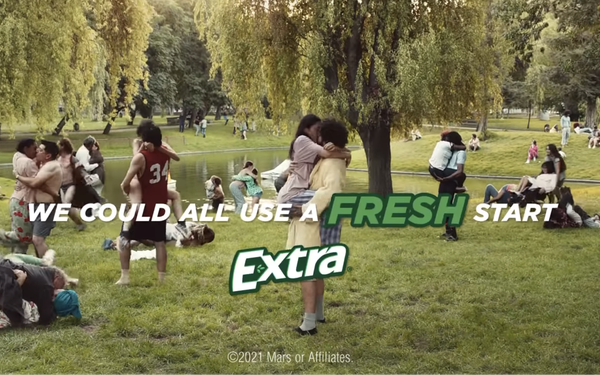 Extra gum and Snickers ice cream are encouraging people to think beyond pandemic lockdown lifestyles in humorous—but quite different—ways.

A new Extra campaign depicts a world in which “normalcy” returns to everyday life. It’s a frenetic production involving hordes of people whose imagined, post-lockdown behavior can make “normal” seem a bit weird.

Snickers takes a lighter approach while envisioning summer vacations in a brand initiative that urges people to chill.

Set to the Celine Dion song “It’s All Coming Back to Me Now,” a long-form Extra spot from Energy BBDO in Chicago opens with a view of an empty urban street “some time in the not-too-distant future.”

As a man climbs out of bed, he hears the welcome news on “stay at home radio station WGUM” that “We are back! We can see people again!”

Cue Dion and her opening verse: “There were nights when the wind was so cold that my body froze in bed if I just listened to it right outside the window.”

The man chews on a piece of gum as he ventures into a hallway—encountering neighbors warily emerging from their abodes.

Outdoors, hundreds of people are seen streaming through the streets to office buildings and a park. Hugging and kissing runs rampant across all ages, ethnicities and gender pairings.

Part of the campaign strategy is to remind people who are already venturing out more that they ought to purchase gum, according to Ivonne Andreu, senior director of gum & mints at Mars Wrigley U.S.

“After staying home for more than a year, we know people are yearning for close connections with friends and family and looking for reasons to smile again,” Andreu tells Marketing Daily.

Snickers opted to envision what appears to be the opposite of Extra’s “near future,” in a campaign from BBDO New York that shows people trying to “chill” in beach settings.

In a spot titled “PTO,” a woman lounging in a beach chair looks up to see a series of airplanes towing banners that contain work-related questions. “Just ignore it,” says her companion.

In a spot called “Buried,” a dad is shown with only his head protruding from beach sand. Superimposed words above counsel him not to “think about what else is buried in the sand with you.”

Across the Verizon programmatic buy, the brand has implemented weather-based targeting triggers—allowing Snickers to reach consumers as the temperature peaks in specific locations.