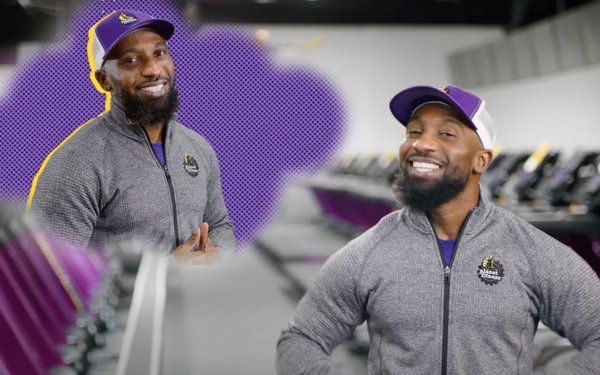 Planet Fitness may be a brand built on a certain level of goofiness. But it's 100% sincere in its focus on just how badly many Americans need to get moving and get happy again, even offering the first month of membership for free.

In new Planet Fitness research linked to May as Mental Health Awareness Month, 77% of respondents said COVID-19 has walloped their well-being. The company cites supporting research from the American Psychological Association in which 53% of adults say they've been less active. Some 61% of people in that study gained weight, averaging an additional 28 to 41 pounds.

While most Americans were either overweight or obese going into the pandemic, a year on the couch has intensified the problem. And overweight is linked to depression. "Since the pandemic, some experts say rates of anxiety have tripled, and depression has quadrupled," says Jeremy Tucker, the gym chain's chief marketing officer. "We're trying to take on the darkness and help people find a way out."

He says marketing for the Hampton, New Hampshire-based company never went dark. And while the shuttering of gyms, yoga and spin studios has crushed many businesses, "we went into action immediately. We just had to get creative and remember that our role is to keep people as active as possible," Tucker tells Marketing Daily.

On the day of the announced closures last March, "We had 'United We Move' ready to launch, offering digital workouts daily,” he adds. “And even though we soon realized it was going to go on for much longer than anticipated, we believe in the power of this brand, and that was the candle that kept us moving."

The programs draw on several of the research insights, including the disconnection many people felt during the pandemic. Among those who say their mental wellness has taken a hit, 57% say they feel disconnected from the things they once enjoyed, and 36% feel out of touch with who they really are.

"The future is finally looking a little brighter," Tucker tells Marketing Daily. "So we want to reassure people that working out offers all kinds of feel-good benefits."

He says the surprising change, as customers come back, is how important the digital component has become -- even to those who come into Planet Fitness gyms. "We were pretty well positioned when everything closed to offer digital workouts and support people as they exercised at home," he says, citing substantial download numbers for its app. "And as things reopened, we realized the need for brick-and-mortar is as strong as ever. By the end of April, we'd gained back nearly 100% of our customers*. But they're still using our digital fitness tools."

Tucker says “there's no substitute for the gym -- but our customers want bricks with clicks. And we're looking to help them feel better both physically and mentally."

Planet Fitness has about 14.1 million members at 2,124 stores in 50 states. But Tucker believes its addressable market is much bigger, especially as more people look for ways to shed those COVID pounds and mental struggles, and points out that of the 155 million adults in its geographical range, “40% have never even been inside a gym.”