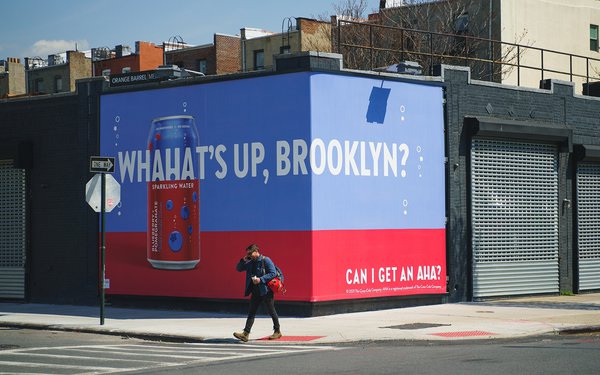 How many ways can you integrate the letters in a brand name like Aha into everyday conversation?

Much more than one could ever imagine, once exposed to the television commercials and localized out-of-home campaign ads for Coca-Cola North America’s dual-flavor, sparkling water line Aha.

Fronting the “Can I Get An Aha?” campaign are comedians Lauren Lapkus—whose current role is that of Agent Phoebe Donnegan on the “Good Girls” series—and Colton Dunn of “Parks And Recreation” and “Superstore” fame.

Things start simply enough in a spot from the Preacher agency called “TAHAco Truck” as Lapkus waits on a hungry Dunn. They manage to incorporate the letters a-h-a into nearly a dozen words like “awesome” and “famished.”

It gets more wackily complex when the duo is interviewed in a commercial titled “Contractually AHAbligated.”

For a full 90 seconds, the self-described Aha “fanatics” explain the legal terms of their representation agreement requiring them to weave the brand name into their language “indefinitely.”

Among other revelations, Lapkus says her family has stopped talking to her.

According to Ramírez, the campaign’s target audience is people who are looking for hydration but also want taste and bubbles.

“If you think of the category a couple of years back, it was flavors but less interesting. We were the first ones to introduce the idea of dual flavors.”

The spots are running across an array of digital platforms and on such streaming television services as Hulu and Tubi—along with audio content in the form of podcasts.

The out-of-home component transforms the names of cities and locales with the Aha influence.

Some examples are “What’s Good Ahatlanta?”, “Hope You’re Thirsty, Chicahago” and “Proud To Be In The Brahanx.”