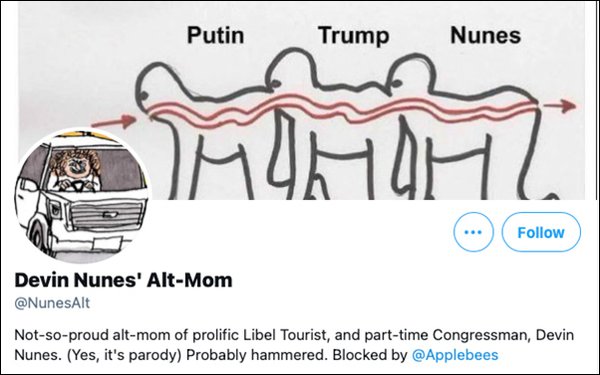 Twitter is challenging a subpoena for information that could identify whoever created a parody account that criticizes Rep. Devin Nunes, a Republican from California.

The company argues that people have a First Amendment right to speak anonymously, and that the subpoena could reflect an attempt to unmask someone solely for denouncing a politician.

“It appears to Twitter that the subpoena may be related to Congressman Devin Nunes’s repeated efforts to unmask individuals behind parody accounts critical of him,” Twitter wrote in papers filed with U.S. District Court Judge Beryl Howell in Washington, D.C. in March and made public on Monday.

“Given Congressman Nunes’s numerous attempts to unmask his anonymous critics ... Twitter is concerned that this subpoena is but another mechanism to attack its users’ First Amendment rights,” the company added.

The subpoena was issued late last year at the request of the Department of Justice, when it was headed by former Attorney General William Barr.

At the time, the government requested a host of data that could potentially identify whoever created the @NunesAlt account -- including addresses, telephone records, device identifiers and IP addresses.

A Justice Department attorney told Twitter last November that the government sought the information as part of a criminal investigation into potential "threatening communications in interstate commerce."

The attorney refused to disclose the alleged threat that sparked the investigation, according to Twitter.

The subpoena came with a gag order that prohibited Twitter from disclosing information related to the unmasking attempt.

In March, Twitter sued to quash the subpoena and lift the gag order. Twitter said in its legal papers that the person behind the account "appears to be engaged in clear First Amendment activity, discussing stances on current events, government policies, and one elected official in particular -- Congressman Nunes."

Howell ordered the matter unsealed on Sunday, ruling that all papers be made public, except for the name and contact information of the attorney representing the government.

Twitter noted in its court papers that Nunes previously sued its service, as well as anonymous users who created parody accounts.

“His efforts to suppress critical speech are as well-publicized as they are unsuccessful,” Twitter wrote. “He recently sued Twitter, attempting to hold it liable for speech by the parody Twitter accounts @DevinCow, @DevinNunesMom, @fireDevinNunes, and @DevinGrapes, and asking the court in that case to order Twitter to disclose information identifying those accounts.”

The lawsuit against Twitter was dismissed last June, and the company didn't have to comply with Nunes' demands for information. But Nunes' lawsuits against the parody accounts @DevinCow and @DevinNunesMom appear to remain pending.

Twitter now says it is "concerned that criminalization of speech may be at issue here," given Nunes' "prior efforts to silence his critics based on speech he deems unfavorable."